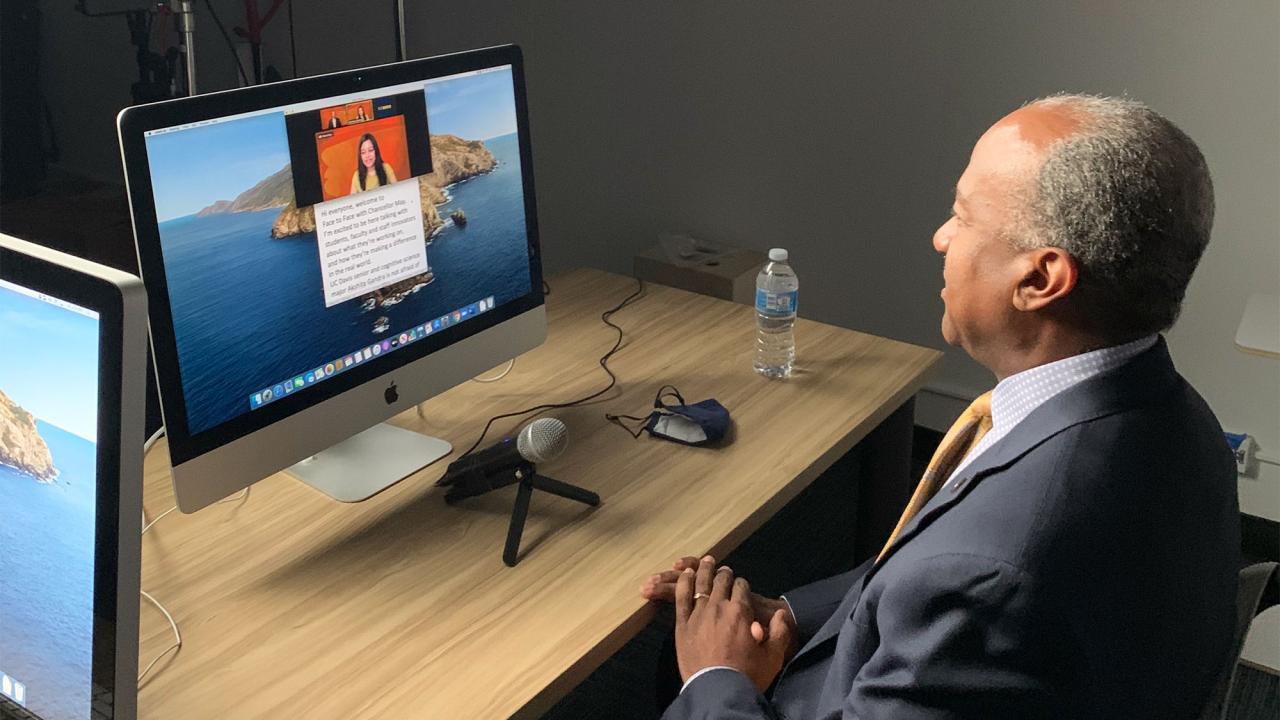 Chancellor Gary S. May is used to being in the spotlight, and now he’s turning some attention on other Aggies making the world a better place.

Today (March 30) he launches a monthly interview show, “Face to Face,” where he interviews a student, faculty or staff member.

“I’m excited to be here talking with students, faculty and staff innovators about what they’re working on and how they’re making a difference in the real world,” May said in the introduction to the first episode.

His first guest is Akshita Gandra, a senior majoring in cognitive science who founded The Revival Zine, an online publication focused on giving a voice to college students from around the country writing about feminism and social justice. She also co-founded the UC Davis chapter of Period, an organization that advocates for access to menstrual health education and products.

“One of the most rewarding things you can do is use whatever skills you have to create some kind of lasting impact,” Gandra told May during the interview.

The two also discussed Gandra’s background, the reasons she chose UC Davis and the motivation behind taking on outside projects like her online publication.

Gandra said she decided to start The Revival Zine after writing about socio-political issues for The California Aggie.

“And I realized that while that was an amazing experience for me, there wasn’t really an existing platform like that, especially through the lens of feminism, specifically for women but also all underrepresented students.”

The interview show also featured a “hot seat” segment, where May asked for one-word answers on topics like Gandra’s favorite place on campus to hang out, favorite food, favorite class and more.

He also invited Gandra to switch from interviewee to interviewer and ask him anything she’d like to know. She asked about a hobby or passion that has positively impacted his life. His answer: mixing up as many as a dozen jigsaw puzzles on the floor of his childhood bedroom and trying to complete them all at once.

“My mom used to think that hobby was really weird,” May said, adding that the added challenge helped him learn to multitask.

The first episode of Face to Face is available on the UC Davis YouTube channel.