Chancellor Gary S. May recently signed higher education’s “Climate Emergency Letter” and took up his duties on the National Commission on Innovation and Competitiveness Frontiers.

●︎ Climate Emergency Letter — As of today (Aug. 9), the letter had been signed by 138 institutions representing approximately 2.3 million students, and 41 higher education networks representing nearly 8,300 institutions. The signatories include all 10 UC campuses as well as UC system as a whole.

“As institutions and networks of higher and further education from across the world, we collectively declare a ‘climate emergency’ in recognition of the need for a drastic societal shift to combat the growing threat of climate change,” the letter states.

The Climate Emergency Letter is an initiative of the Alliance for Sustainability Leadership in Education, or EAUC; the U.S.-based higher education climate action organization Second Nature; and UN Environment’s Youth and Education Alliance.

They plan to deliver the letter publicly in connection with the UN Climate Action Summit, Sept. 23, to emphasize higher education’s commitment to attaining the UN’s sustainable development goals having to do with climate change and education.

Signatories to “The SDG Accord: The University and College Sector’s Response to the Global Goals” are collectively committing “to step up to the challenge” by supporting a three-point plan: 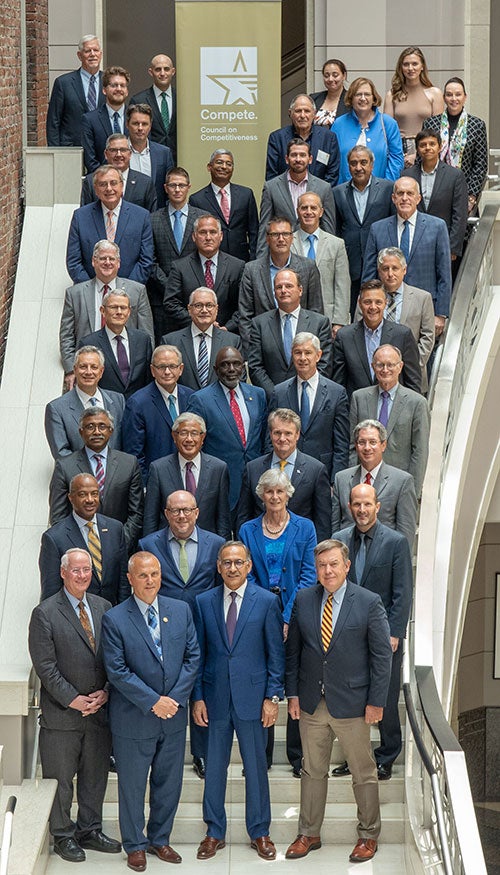 Chancellor May, left, second row from the bottom, in group photo at Aug. 7 launch of the National Commission on Innovation and Competitiveness Frontiers, at the Gallup Building in Washington, D.C. (Courtesy Council on Competitiveness)

●︎ National Commission on Innovation and Competitiveness Frontiers — Chancellor May is among the commissioners of this board that met for the first time Aug. 7 in Washington, D.C.

The commission is the flagship initiative of the Council on Competitiveness, a nonprofit, Washington-based organization with a diverse and nonpartisan membership representing major sectors of the economy: CEOs, university presidents, labor leaders and national lab directors.

The new commission originated with the council’s Clarion Call report of 2018, which illustrated a number of U.S. economic trends and identified key challenges to America’s technological leadership and long-term competitiveness.

To address these concerns, the report called for the formation of the National Commission on Innovation and Competitiveness Frontiers “to optimize the nation for a new, unfolding, evolving innovation reality that will shape the nation’s prosperity for the next half century.”

Now the work begins to create this “innovation-for-all movement,” inclusive of industry, education, research and labor, as described by Chad Evans, executive vice president of the Council on Competitiveness.

As Chancellor May joins the commission, he might need a new Facebook tagline, maybe something like, “Innovation is who we are at UC Davis.” Technologies developed here enabled the foundation of 14 startup companies during the fiscal year that ended June 30, and 16 the year before.

“Research universities like UC Davis are a key source of vital innovation for numerous industries,” said Prasant Mohapatra, vice chancellor for research, said in a July 19 news release. “These startups are undertaking the important first steps in developing and refining the commercial potential of their inventions. It’s exciting to see such a wide range of entrepreneurial undertakings based on our campus innovations.”

The chancellor himself is an accomplished engineer who served on the faculty of the Georgia Institute of Technology for 26 years, the last six as dean of the College of Engineering before he joined UC Davis in 2017.

He was elected to the National Academy of Engineering — one of the highest honors in the field — in 2018, recognized for his innovations in educational programs for underrepresented groups in engineering and his contributions to semiconductor manufacturing research.

He has won numerous other honors for his research in computer-aided manufacturing of integrated circuits and has authored more than 200 technical publications, contributed to 15 books and holds a patent in this topic.

In 2010, he was named “outstanding engineering alumnus” of UC Berkeley, where he earned his master’s and Ph.D. degrees in electrical engineering and computer science.