CHANCELL-ING: Let Art Inspire You in the New Year

Happy New Year! I hope 2023 has started out well for you and your loved ones. 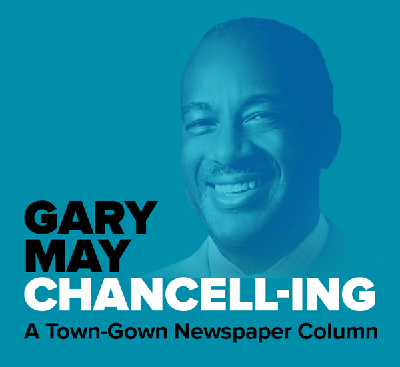 The start of any new year can be an especially busy time as we settle back into routines or start new ones. With the promise of new beginnings that January brings, it’s an ideal time to seek out inspiration from the broader community. Here at UC Davis, you don’t have to look further than the Jan Shrem and Maria Manetti Shrem Museum of Art for that spark.

This museum opened in 2016 and established itself immediately as a definitive space for contemporary art — not just at UC Davis, but in all of Northern California.

As part of a thriving campus, the Manetti Shrem Museum is a teaching museum that provides work opportunities and hands-on experiences for students who want to pursue careers in art. For example, students can study Wayne Thiebaud’s Unfinished Portrait of Betty Jean, which hangs in the Collections Classroom, to understand Thiebaud’s process of building a painting.

Last year ARTnews, the oldest (founded in 1902) and most widely circulated art magazine in the world, recognized the Manetti Shrem as one of the world’s 25 best museum buildings of the past 100 years — making it one of just four U.S. museums and the only public university museum on this prestigious list. UC Davis is now in the company of such global architectural icons as the Louvre, the Guggenheim Bilbao in Spain and Centre Pompidou in Paris.

I urge you to participate in the museum’s winter season celebration on Sunday, Jan. 29, when Professor Emeritus Mike Henderson will be honored. Mike will join me for a conversation about his influences, life stories and career at UC Davis. Come join us at the celebration, which runs from 2:30 to 5 p.m. Our conversation starts at 3:30 p.m.

Mike taught at UC Davis for 43 years and his works have been displayed at the Whitney Museum of American Art in New York and the San Francisco Museum of Modern Art. Now, “Mike Henderson: Before the Fire, 1965-1985” marks his first U.S. solo museum exhibition in 20 years. Many of the vital works in this exhibition were thought to have been lost in a 1985 studio fire but have been recovered and restored by the museum and its partners.

Mike’s work is a testament of speaking truth to power through the arts, with bold and colorful brushstrokes that almost leap from the canvas.

In the meantime, more exhibitions are on display at the Manetti Shrem Museum, including “Tick Tock Belly Clock” from Loie Hollowell. She’s a Woodland native and among the vanguard of painters in this newest artistic generation. You’ll find an emphasis on geometry and spirituality in her work, described by The New York Times as “abstract body landscapes.” Her Manetti Shrem Museum show is her first solo U.S. museum exhibition. It features new works from 2020-21 coinciding with her second pregnancy.

The “Habitats for Travelers” exhibition by the late Roy De Forest is also up through May 8. Roy was a pioneering member of UC Davis’ art faculty along with William T. Wiley, Thiebaud and Robert Arneson, a faculty member for 40 years who created the iconic Egghead sculptures on campus. De Forest’s own work embraces fantasy, humor and irreverent imagery of people and animals, especially dogs.

So, if you’re seeking inspiration and a fresh outlook for the new year, or if you simply need a reminder of how the arts can connect us, plan a visit to the Manetti Shrem Museum.