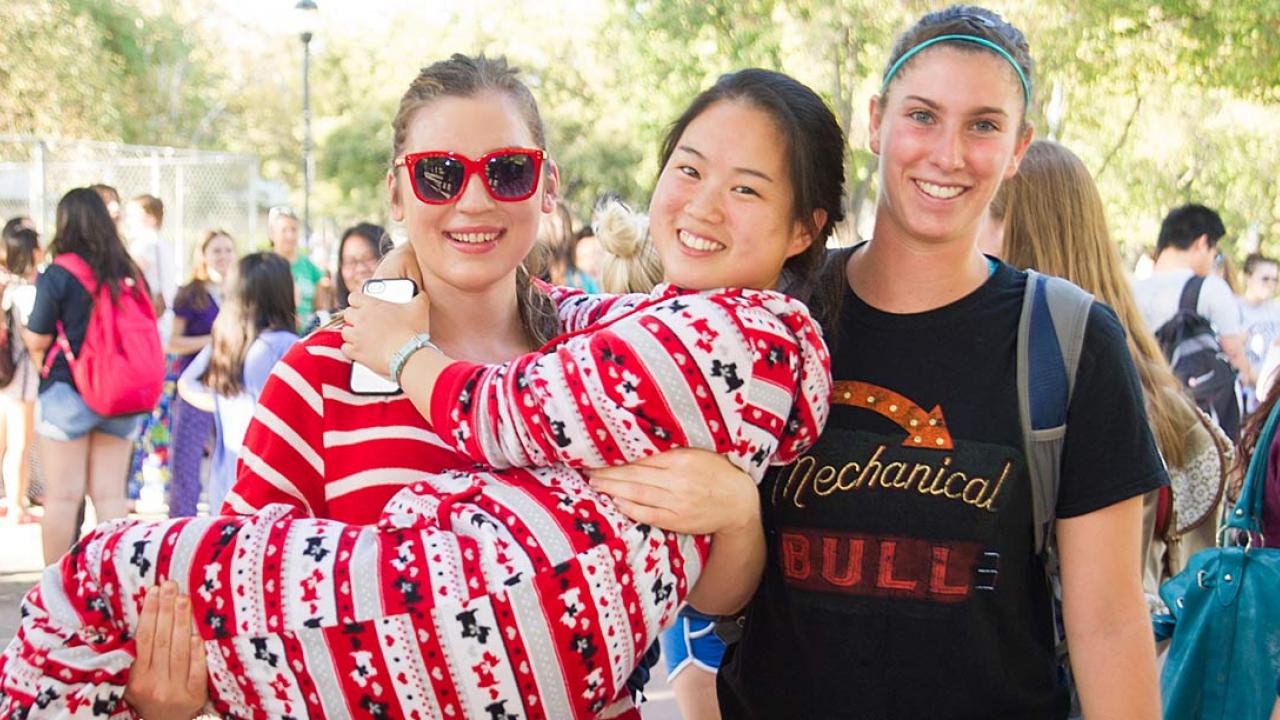 Do you have what it takes to be an Aggie? UC Davis is filled with traditions that help make this university one of a kind. If you can say you’ve participated in all these activities, you just might bleed blue and gold.

You’re no Aggie unless you’ve tromped downtown in your jammies the day before Homecoming — harking back to the night 1912 when pajama-clad students sneaked out of their dorms and went to the train station to greet returning alumni. Over time this tradition, called Pajamarino, has evolved into a festive evening — with food, music and, of course, the Pajamarino Parade (which this year will start from campus and end at the E Street Plaza, because of construction near the depot off G Street. Learn the “Aggie Fight Song.”

2. Kissing the Egghead for good luck

Some college students might have a lucky sweater or talisman — but Aggies kiss an Egghead for good luck. During finals students may need a little something extra to make sure they do well. According to tradition, kissing the Egghead in front of Peter J. Shields Library will increase your chances of acing your finals. (Some friendly advice: Actually studying for exams is more effective than placing your fate in a campus statue). While you’re at it, go on a hunt around campus to try and find the rest of the Eggheads, too!

In 1969, the Whole Earth Festival was born out of an art class. It has since come to represent an important, ongoing event in UC Davis’ history. The event — with art, music and food — is entirely zero waste. This celebration promotes community and sustainability, which are values dear to any Aggie.

Started in 1909 as an open house, Picnic Day has evolved into a campuswide open house that draws thousands of people. If you want to be a real Aggie, you just have to experience it for yourself. Show up to watch the Battle of the Bands and cheer on our Cal Aggie Marching Band-uh. Find a prime seat to view the Picnic Day Parade. Check out the giveaways, Chemistry Magic Show and fashion show — who knows where you’ll find yourself at the end of the day.

Sporting Aggie blue and gold is a necessity when it comes to cheering on our sports teams. And remember to learn the “Aggie Fight Song,”(see bottom right box) because you’ll be hearing it a lot. There’s no better feeling than being a part of the university pride, so throw on your blue-and-gold gear, come to a game and get ready to yell “Go Ags!” This Homecoming, UC Davis Athletics and CAAA are adding to the tradition by encouraging all Aggies — students, alumni and friends — to post pictures of themselves on social media with this poster using #AggieStrong. Those who participate will be entered into a drawing for a one-of-a-kind, on-the-field experience or a UC Davis Fan Prize pack, courtesy of UC Davis Stores.