With all the ways to tell the story of California agriculture, few are as picturesque as one collection in the UC Davis University Library.

A treasure trove of commercial art is stored in the form of seed packets and box labels created in the first three decades of the 20th century.

“These pieces document and illustrate California’s agriculture, the greatest in the nation,” says Axel Borg, a postharvest agricultural library specialist at UC Davis.

Borg interpreted the history and meaning from a number of agricultural art pieces from the library’s Special Collections. Together they show how seed companies and fruit packers used marketing to captivate the consumer.

The gems of this collection can be viewed in the main room of Special Collections, located on the first floor of the library. Four large, framed, glass paintings by artist Maxfield Parrish and commissioned by the Ferry-Morse Seed Co., were a gift to the university.

Parrish, whose life spanned from 1870 to 1966, was an American painter and illustrator known for his original style. His popularity resurged mid-century and inspired Elton John's Caribou album and the Princess Bride movie poster. But long before, he was illustrating seed catalogs and annuals as part of Ferry-Morse’s advertising program.

The Ferry company started in 1856 with the creation of M.T. Gardner & Co. in Detroit, Michigan, with Dexter M. Ferry as a partner. In the early 1900s, he purchased land in California and began producing seeds. By this time, California farmers had been shipping their goods by rail to the Eastern markets for a few decades.

In 1930, Ferry and Charles Copeland Morse combined forces to form the Ferry-Morse Seed Co. Their seed packets show the variety of produce people used to fill their gardens, according to Borg.

Carrots were among the many seed packets the Ferry-Morse Company sold. California currently leads the nation producing 66 percent of all carrots in the United States. “Whether mashed for infants or served as juiced food for seniors, carrots are a staple of life for all ages,” says Borg.

California is also the lead producer of head, leaf and romaine lettuces in the U.S. To achieve high levels of production, early companies developed refrigerated rail cars to ship lettuce to the Midwest and Eastern markets, earning lettuce the title of California’s “green gold.”

Melons and cantaloupes still claim California as their top producer. And despite only producing 10 percent of cucumbers in the nation, the state remains the biggest producer in fresh cucumber markets, Borg points out.

The variety of cantaloupe named Admiral Togo, in honor of a Japanese commander, connects an international history to a California vegetable.

According to Borg, during the Russo-Japanese war, Togo’s fleet destroyed a Russian fleet in the Battle of Tsushima. “This illustration complicates our history as it was also around the time of widespread discrimination against Asian immigrants, especially Japanese and Chinese people,” says Borg.

“Yet California’s agriculture would not be what it is today without the major accomplishments of Asian and several other immigrant groups.” 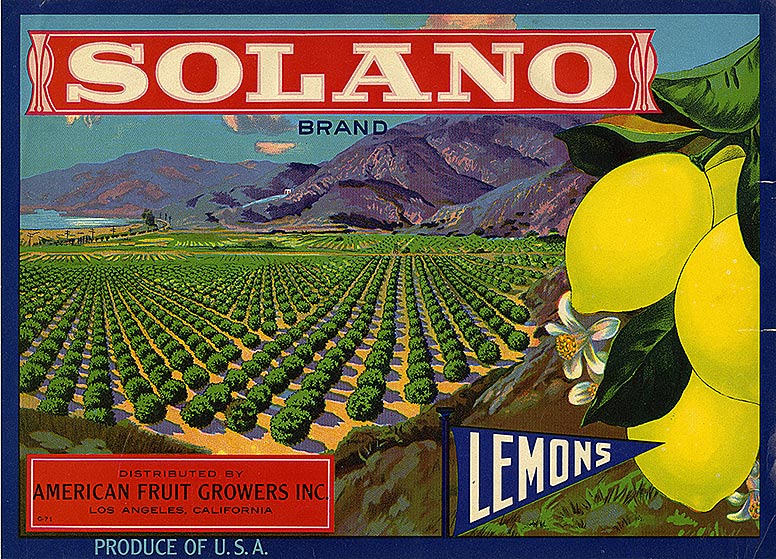 Artistic record of our fruits and vegetables

“This lemon orchard label is representative of the ideal pastoral California landscapes that were widely promoted,” he says. Even today, when you drive through rural California, he says you can find a lone farmhouse in the middle of orchards, much like the image on this label.

The Clovis Best label featured at the top of this story “is an example of labels that were more generic in composition and could be over-printed with the brand name, company and variety of grape,” Borg says.

Clovis, found in the heart of the San Joaquin Valley, is a region that has seen extensive alterations. Since 1883, farmers leveled the hills with the Fresno Scraper, a push cart drawn by horse, and now maintain the level land by laser-controlled mechanical scrapers, he reports. This allowed for irrigation and easier nut harvesting.

The Clovis Best label featured at the top of this story “is an example of labels that were more generic in composition and could be over-printed with the brand name, company and variety of grape,” Borg says.

Clovis, found in the heart of the San Joaquin Valley, is a region that has seen extensive alterations. Since 1883, farmers leveled the hills with the Fresno Scraper, a push cart drawn by horse, and now maintain the level land by laser-controlled mechanical scrapers, he reports. This allowed for irrigation and easier nut harvesting.

According to Borg, lug label themes also included the movies, reflecting the rise of the film industry alongside the citrus industry in Southern California in the first half of the 20th century. The collection includes one such label from the 1926 film, The Winning of Barbara Worth. The silent film follows a rancher’s daughter as she is wooed by a cowboy and an irrigation engineer.

The ethics of irrigation

The story emphasized the ethics of irrigation and its importance in the Imperial Valley, Borg says. Irrigation proved to be a major reason for California’s agricultural dominance.

“In oral history, it is said that the cost of the label and the box was often equal to the cost of the fruit,” says Borg. This indicated the low cost of California’s abundant produce, and the importance of the lug label.

A marker for California's agricultural success

While this collection represents only a few of the innovative accomplishments by California agriculture, it is a marker for the state’s agricultural success, according to Borg.

“In 2013, California’s agricultural economy was just short of $45.5 billion, about 2 percent of California’s GDP,” says Borg. “With such a rich history, these illustrations serve as a reminder of the achievements California is capable of.”

Chancellor May: Bringing Out Our Best