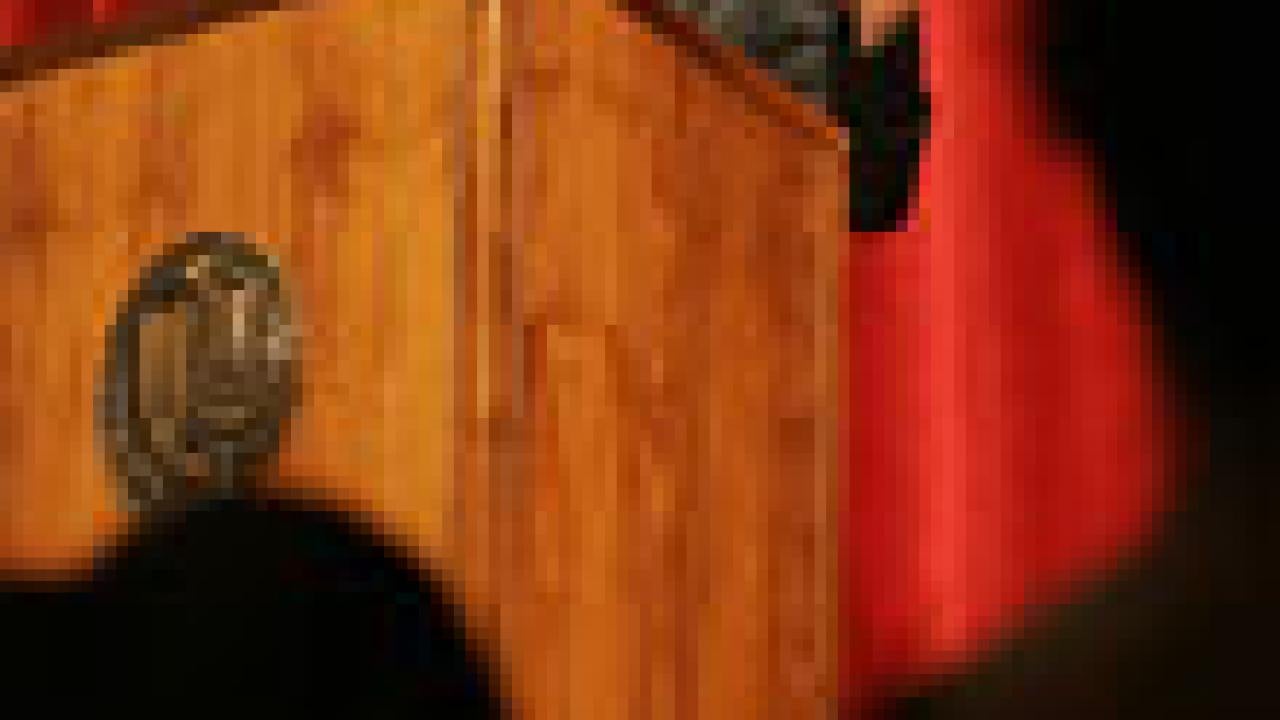 Angela Davis lived up to her billing as an "organizer" when she spoke in Freeborn Hall last week.

Davis — feminist, civil rights and prison rights activist, UC Santa Cruz professor and, in 1970, one of the faces on the FBI's list of the 10 Most Wanted — asked to see how many organizers were in the hall. Two dozen or so people, out of a standing-room-only audience of more than 1,300, raised their hands.

"We should figure out … how to use this," Davis said. So, after her 1½-hour talk, she invited the organizers to come to the front of the hall to meet with people willing to help.

Call it a good example of her theme for the night: "How Does Change Happen?"

One organizer advertised her cause by holding up a sheet of 8½-by-11-inch paper proclaiming: "It Takes a Village (of People of Color) to Start a Revolution." Another held a sign reading "Too Few for Too Long."

Others looked for help on the labor movement, a peace rally, Men Acting Against Rape, Blacks for Effective Community Action, even Project Compost.

And while the response did not appear overwhelming, Davis had given her audience something to think about. They gave her a standing ovation when she took the stage and another when she completed her talk, and frequently applauded her remarks at this event presented by the Women's Resources and Research Center.

Davis, 62, grew up in Birmingham, Ala., as one of the "coloreds" who had their own drinking fountains, their own restrooms. She said her mother told her, "This is not the way things are supposed to be … (and) they will not always be this way."

Indeed, things changed, thanks to efforts like the Montgomery bus boycott — something, by the way, that women organized, Davis said. Not the Rev. Dr. Martin Luther King Jr.

"The real work happened long before Dr. King ever thought of associating himself with those struggles," Davis said.

Rosa Parks, who refused to give up her seat on a bus, was not the "tired woman" portrayed by the media, Davis said. She described Parks as a trained organizer. "This isn't the history that we learn, is it?"

With the civil rights struggle and others, Davis said, history often tends to favor tales of heroic individualism, usually by a man, with no regard for the truth. "This is dangerous, really, really dangerous," she said.

Such rewriting of history, Davis said, "erases" the contributions of the many. Segregation came to an end, she said, not because "presidents or legislators or judges one day had epiphanies … (but) because ordinary people became collectively aware of themselves as potential agents of social change … (with) the power to create a new world."

She noted this year's celebration of the 40th anniversary of the founding of the Black Panther Party in Oakland. Her association with the Panthers led to her being named to the 10 Most Wanted list, charged with homicide, kidnapping and conspiracy — accused of buying the guns used in an aborted attempt to free three prisoners from a Marin County courtroom in 1970.

Authorities captured her two months later in New York City. She was acquitted in 1972.

During a question-and-answer session in Freeborn Hall, someone in the audience handed Davis a 10 Most Wanted poster, the one with her picture. "Listen, I did not want this to happen," she said, "and it was really, really scary."

"I want you to think about it not as an assault against me as an individual, but this was an attack on people who define themselves as revolutionaries, and especially against black women." She said she is forever meeting black women across the country who say they were arrested during the time authorities were looking for Davis, with officers saying they mistook the women for Davis.

She said that Huey Newton and Bobby Seale founded the Black Panther Party to monitor "rampant police violence." She said Panthers armed themselves with logbooks and guns, carrying the weapons legally, unconcealed, in a symbolic way.

"I don't want to romanticize guns … or violence," she said, "(but) that was an amazing feat of the imagination … a way of manifesting solidarity" with the struggling people of Oakland and beyond, in Vietnam and Africa, for example.

She said "there were real problems with the way the Black Panther Party unfolded — but that's OK." Because this movement "had a powerful impact on people all over the country and all over the world."

The Panthers did not stop police violence or racial profiling, Davis said, "but they achieved a lot of other changes." The San Francisco Chronicle last week noted the Panthers' breakfast program for hungry children, the party's offer of groceries and medical care to the poor, and voter registration efforts.

Davis urged people to use their knowledge in a "transformative way … as a way of helping us remake the world so that it is better for all its inhabitants, and I am not only talking about human beings."

More of what Angela Davis had to say:

She said commodities, knowledge, technology and money cross borders, so why not human beings?

She protested fencing along the Mexican border, saying that the United States is keeping out people "whose lives have been destroyed by the impact of global capitalism."

"I'm not talking about the choices that people make to enter into marriage," she said. She said marriage subjugates women to men, and is an "economic institution."

She also ascribed a "political role" to marriage, and noted that slaves were not allowed to marry.

"Yeah, the law said they were guilty, but the law doesn't know who this person is, how this person grew up, what kind of community, what kind of state of economic deprivation this person endured," nor does the law know about his other access to education and jobs.