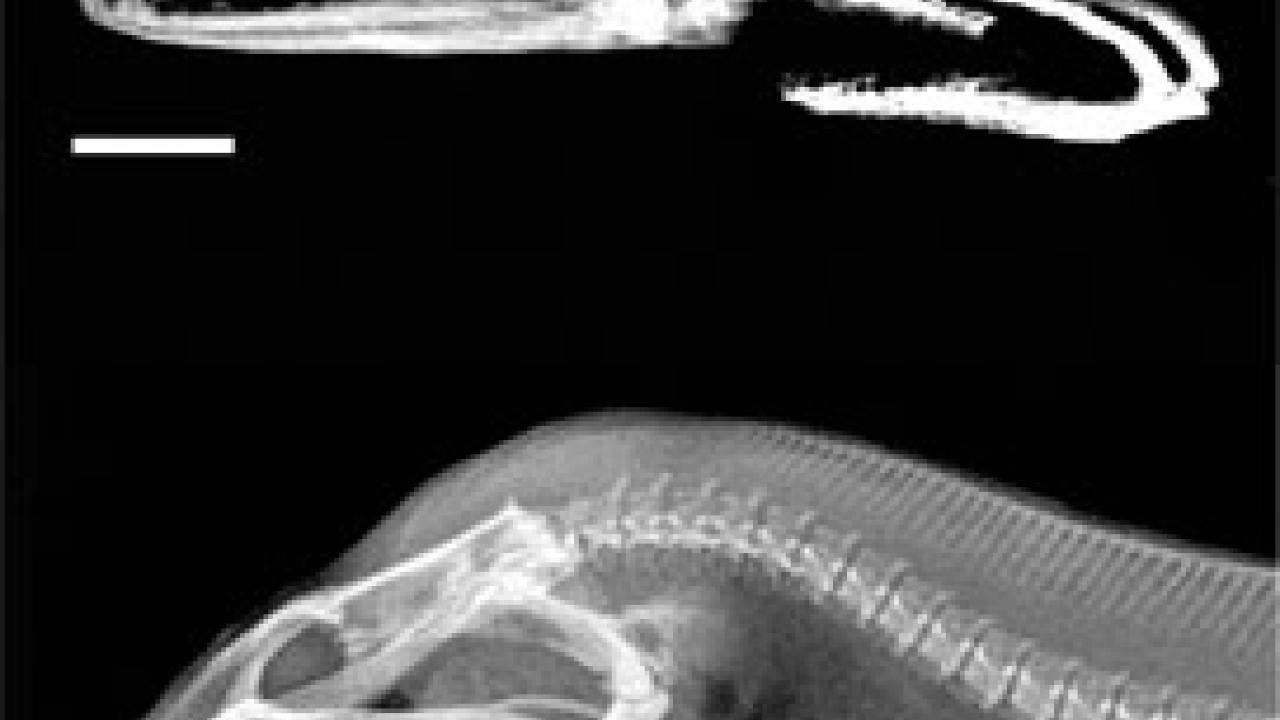 Moray eels have a unique way of feeding reminiscent of a science fiction thriller, researchers at UC Davis have discovered. After seizing prey in its jaws, a second set of jaws located in the moray's throat reaches forward into the mouth, grabs the food and carries it back to the esophagus for swallowing.

"This is really an amazing innovation for feeding behavior for fishes in general," said Rita Mehta, a postdoctoral researcher in the Section of Evolution and Ecology at UC Davis.

The research shows the amazing diversity possible among living things, even in something as fundamental as feeding, Mehta said.

The researcher used a high-speed digital camera to film eels feeding in the laboratory, and was able to capture the rapid movement of these secondary pharyngeal jaws. She also used X-ray and other imaging equipment at the UC Davis School of Veterinary Medicine to work out how the jaws could move.

More than 200 species of moray eels are found in tropical waters worldwide, often living in holes in rocks and coral reefs. In the wild, they can reach 10 feet in length.

Most fish feed by suction. When it comes upon food or prey, the fish rapidly expands its mouth cavity, sucking in water and the food with it. Some fish feed by overtaking prey with their mouth open or grabbing it in their jaws, but most of those fish then use suction to move the food from the mouth to the esophagus.

But moray eels have little ability to generate suction through their mouths, Mehta found. Instead, they first grasp food with their powerful, toothsome outer jaws. Then the pharyngeal jaws, armed with large, curved teeth, reach forward and seize it. At the same time, the outer jaws release the prey and the pharyngeal jaws bring it back for swallowing. The whole process takes just fractions of a second.

Other fish are known to have pharyngeal jaws that can grind or crush food, but "nothing this spectacular," said Peter Wainwright, professor of evolution and ecology at UC Davis and co-author with Mehta on the paper. Only the moray eel seems to have a second, mobile set of jaws that can reach forward and grab prey.

At rest, the pharyngeal jaws sit behind the eel's skull. When they reach forward, they move almost the length of the animal's skull, but do not protrude beyond the powerful outer jaws. The arrangement means that if the eel can sink in a few teeth to hold its prey, it can secure its meal with the pharyngeal jaws, the researchers note.

Mehta compared the eels to snakes, which also have to fit large food items through a relatively narrow mouth into a long, thin body. Snakes solve the problem by "ratcheting:" they can separate the left and right sides of their jaw, and hold onto the food with one side while they work the other side of the mouth round it.

Mehta and Wainwright are now investigating how the morays' extraordinary jaws evolved. Other species of eel, such as the American eel Anguilla, feed by suction. Moray eels may have evolved other methods as a result of hunting in confined spaces, where they could not rapidly expand their heads to create suction.

"Eels are an amazingly diverse and bizarre group of fishes, and not very well known," Wainwright said.

The research is published in the Sept. 6 issue of the journal Nature and was supported by grants from the American Association of University Women and the National Science Foundation.