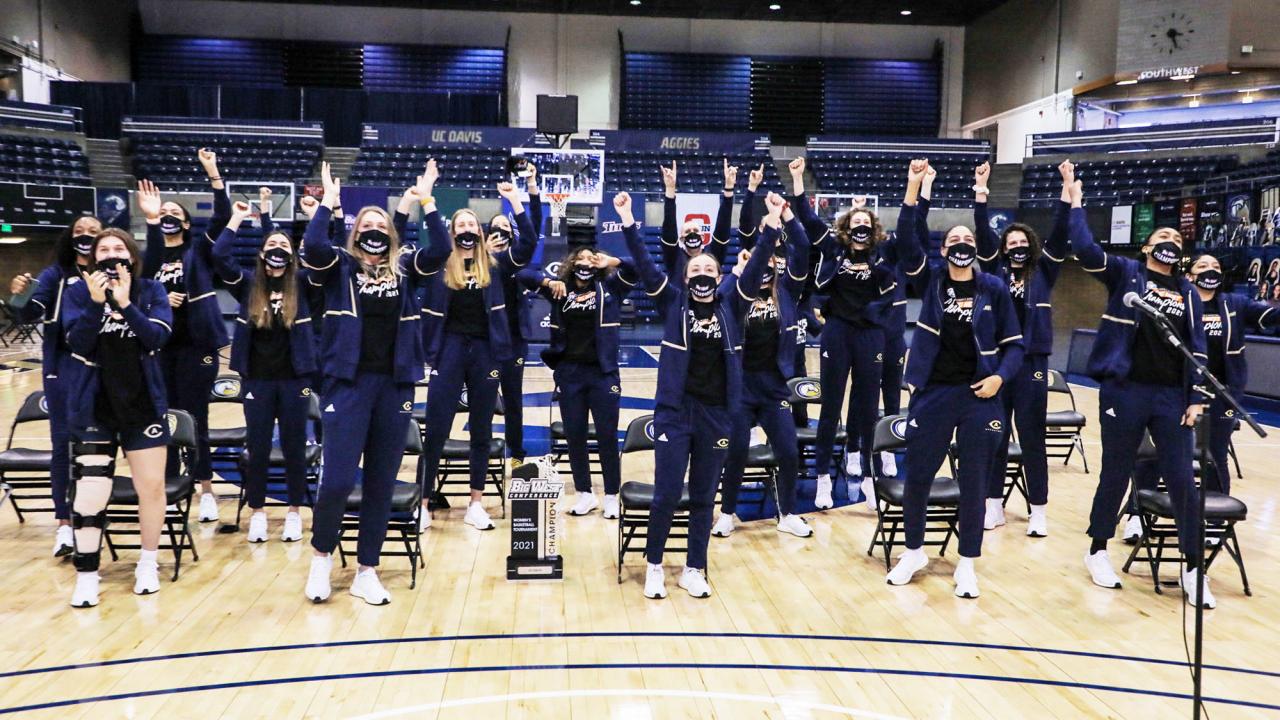 As champion of the Big West Conference women’s basketball tournament last week, the Aggies won a trip to the NCAA tournament for the second year in a row — and this time they get to go.

Now at Aggie Stores: T-shirts, sweatshirts and hoodies, plus mugs and drawstring backpacks and more — all celebrating our "Regular Season and Tournament Champions."

The pandemic prompted the NCAA to cancel last year’s tournament. This year, all 64 teams will be in one general area — San Antonio — for the entire tournament, in a bubble environment, instead of the typical set-up that would see the teams spread out all over the country and traveling long distances between venues as the tournament progressed.

Monday afternoon (March 15), the Aggies gathered on their home court in The Pavilion to watch as ESPN announced the tournament’s seeding and first-round schedule. The sports network showed the Aggies and other teams reacting when they heard their names called.

Stanford, the No. 1 seed in the Alamo Region, has defeated UC Davis in the Aggies’ two previous appearances in the NCAA’s Division I tournament. UC Davis and Stanford could meet in the third round of this year’s tournament.

The Aggies have won the Big West Conference regular season the last five years. But it’s the conference tournament that determines who gets the Big West’s automatic berth in the NCAAs.

The Aggie men’s team won its first game in the conference tournament, 58-56, over Cal State Bakersfield, before losing to the eventual tournament winner, UC Santa Barbara, 71-55, in the semifinals.

The Aggie football team has its home opener this Saturday (March 20) in the delayed Big Sky Conference season. UC Davis (1-1) and Cal Poly (0-1) are set for kickoff at 1 p.m. No fans allowed in UC Davis Health Stadium — but you can watch on Sacramento television CW31 or listen on KHTK 1140 AM.

UC Davis and Cal Poly are scheduled to meet twice in the shortened season; the first game has been designated the teams' traditional Battle for the Golden Horseshoe.

The Aggies are coming off a loss last Saturday at Weber State, 18-13, after an upset win over No. 2 Idaho, 27-17, in the season opener. The Cal Poly Mustangs have played only one game so far, losing last week to Southern Utah, 34-24.

The Aggies are scheduled to play three in a row at UC Davis Health Stadium — March 20 and 27, and April 5 — and that will be it for home games.

Here’s the remaining schedule, home and away: