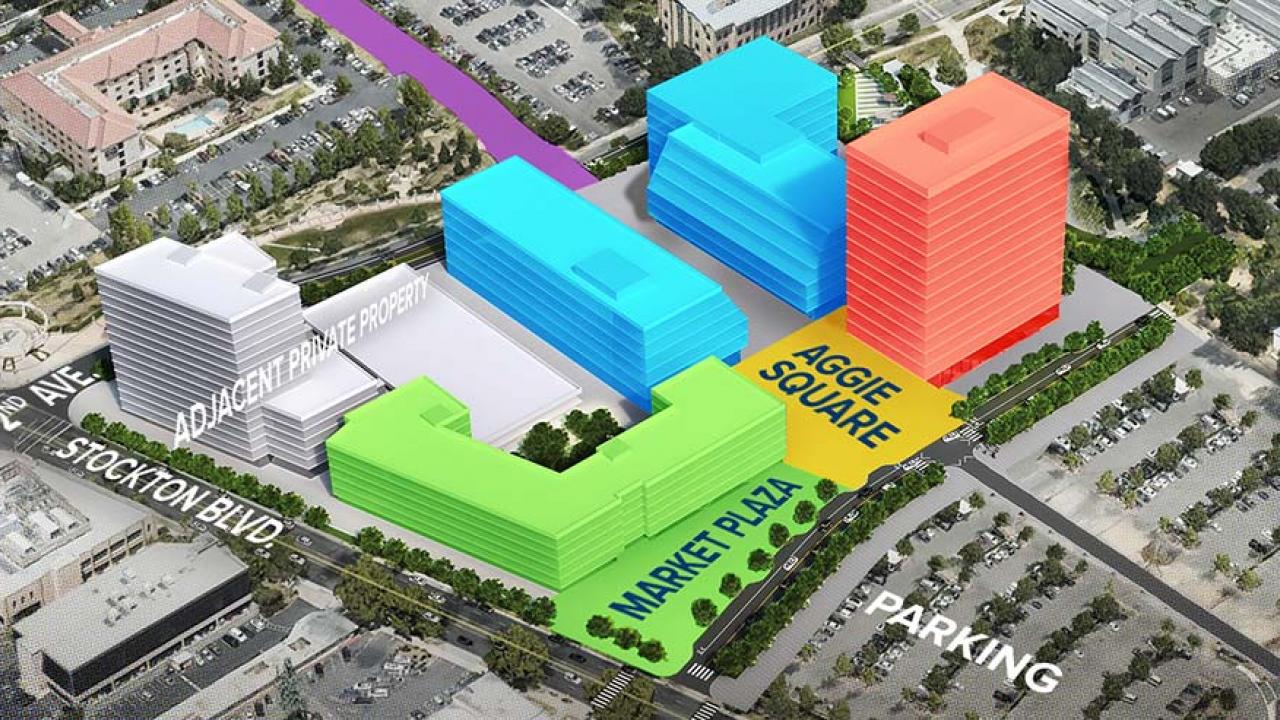 To the question of “Why is Sacramento the right city for your next project?” Tom Osha offered up many factors.

Osha, the senior vice president of innovation and economic development at Wexford Science & Technology, one of two firms which will design, finance, construct, own and manage the first phase of Aggie Square, first mentioned UC Davis.

“First of all, we look for a top-flight university,” when deciding where to pursue Wexford’s projects. The company, chosen as the developer for Aggie Square on UC Davis’ Sacramento campus, has built 14 “innovation districts” around the country, with Aggie Square being the 15th and the second west of the Mississippi River (Arizona State University’s Phoenix Biomedical Campus being the other).

Additionally, Osha explained, “We had been looking at Sacramento. One of my roles is to decide where Wexford goes — the kinds of markets we want to be in, the kind of universities we want to partner with.”

Thus, when Mark Romney, the chief strategy officer for Aggie Square, approached Osha in 2017 at an Association of University Research Parks event and asked him if UC Davis was on his radar, Osha started to dig further.

“[Wexford] tracks about 50 cities around the world at any time,” Osha explained. “We’d been tracking Sacramento,” he noted, aware of the favorable “changing dynamics” of the city.

Osha, who has been with Wexford for 11 of the company’s 15 years, elaborated.

“The real value proposition comes from the university, first and foremost. You can have a great site, but you have to have a great university” to develop a successful innovation district.

“The thing that makes it interesting,” said Osha, regarding choosing the right university and the right city, “is having all the pieces start to line up. First, the institution has the leadership. We knew where Chancellor [Gary S.] May had come from,” Osha said. “Knowing he’d come from Georgia Tech and Atlanta, [showed] what could be done [by May] in linking the university’s mission with urban economic development.”

Osha continued, “Second, it appeared to us, the city and university were in alignment with their vision.” And this is more necessary, he explained, when you are in an aspiring market such as Sacramento. “You don’t have to try as hard if you’re in San Francisco, New York City, London,” because processes have already been established.

Alignment among leaders is key, Osha said. “We saw that emerging from Sacramento Mayor [Darrell] Steinberg and Chancellor May.”

Even into his 15th project, Osha is still excited by the potential he sees in the right partnerships. The idea of Aggie Square as an educational and economic engine, “not just for Ph.Ds and M.D.s, [but as a place where] 30 percent to 40 percent of the jobs from Aggie Square shouldn’t require four-year degrees — how do you get these investments in Aggie Square to benefit everyone?”

Osha also emphasized that this is not about a real estate deal. Part of what made him understand that UC Davis and the city of Sacramento were in the right mindset for Aggie Square is that “the talk [UC Davis and Sacramento] were all talking wasn’t about the real estate, but about what the university and city would be able to achieve.”

He added, “When we run into a situation where someone [only] wants a building or is focused on the real estate, we politely decline.”

When asked what Osha wanted to make sure was said in this story, he had two points.

“The importance of an innovation district — what we call a ‘knowledge district’ — isn’t to any one department or only the tenants … The most successful university uses it to achieve the strategic goals for the entire university.”

As well, Osha remarked: “I’m not sure we’ve ever met a more prepared university partner [that has] done its homework and has everyone on board. We’ve not met any institution more prepared and already believing in the success of Aggie Square.

“Some of the things that might feel scary in a new market aren’t because of UC Davis’ preparedness.”