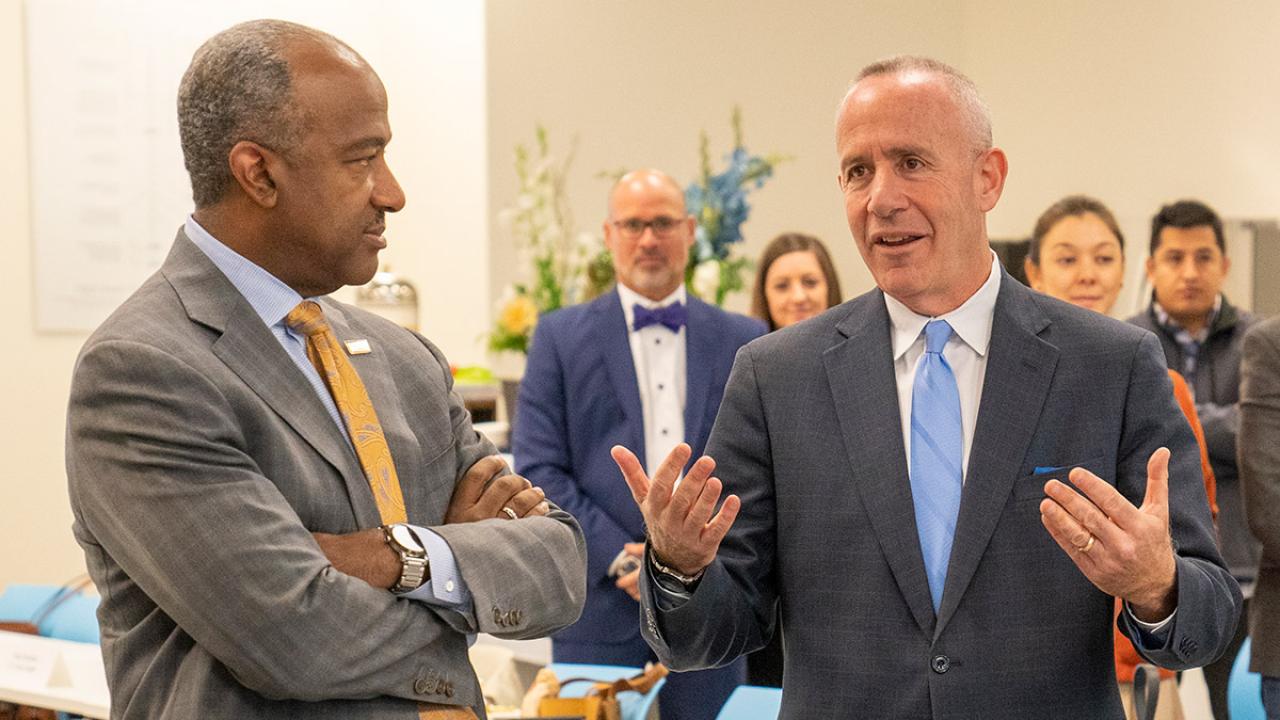 Aggie Square: Community Is Our Priority

Vulnerable communities are shouldering the worst impacts of the economic downturn and will struggle to recover lost ground.

To build resilience, these communities need job opportunities and the training necessary to fill them. They need stable institutions that listen first and invest in local neighborhoods. They also need the creative and intellectual capacity to solve persistent problems.

Working closely with Councilmember Jay Schenirer and Councilmember Eric Guerra, we have designed Sacramento’s Aggie Square with this in mind.

Two years ago, when we announced plans to build an “innovation ecosystem” at the UC Davis Sacramento campus on Stockton Boulevard, we did so with a dream of using our collective resources to benefit the city of Sacramento, UC Davis, our local communities and the broader region.

At that time, we could never have predicted the COVID-19 pandemic and its repercussions for jobs, housing and the economy. Given this context, Aggie Square holds even more promise to benefit the greater Sacramento region.

While plans have progressed, we know our community members want to be included in the process. From the beginning, Aggie Square has focused on creating partnerships to deliver well-defined benefits based on community feedback.

Construction of Aggie Square’s first phase will mean more jobs. A recent economic impact report predicts that Aggie Square initially will bring more than 5,000 construction jobs to Sacramento at a time when many other projects are stalled.

UC Davis and its private developer partners, Wexford Science & Technology, have pledged to work with the Sacramento-Sierra’s Building and Construction Trades Council to build Aggie Square. This directly benefits local union construction workers and their families, with apprenticeships and local hiring targets in nearby communities of greatest need.

Aggie Square also will be a source of ongoing jobs: More than 3,500 are anticipated in the first phase, with more than 15,000 supporting jobs generated across the six-county Sacramento region. The ongoing economic impact of Aggie Square’s first phase could be in the range of $3 billion.

In January 2021, the City of Sacramento and UC Davis will identify steps so local residents can get the skills they need to fill jobs at Aggie Square when it opens in 2023. UC Davis will hold virtual job recruitment events, partnering with the city and local, community-based organizations.

UC Davis will expand its work with local schools, building on current programs such as the College Opportunity Program spearheaded by the UC Davis School of Education. The university also will develop a scorecard to make sure that youth in local schools benefit directly from these efforts.

We will create an Aggie Square Community Partnership with a formal voice for representatives from surrounding neighborhoods. This partnership group will administer a fund created by a surcharge applied to rents for Aggie Square tenants.

Half of the members of this group will be institutional partners, and the other half will be neighborhood representatives. They’ll develop specific criteria to direct the fund to community priorities such as youth development, workforce training and place-making.

We know expectations are high, as they should be. The university and the city are finalizing an agreement to assure community benefits, with details on workforce development, employment opportunities, transportation and more. In the coming months, we will also partner to finance critical project infrastructure in an innovative and strategic way.

We recognize many community partners have expressed concerns about the need to preserve affordable housing in neighborhoods surrounding Aggie Square. The city and its elected officials have agreed to assume a leadership role in addressing the community’s housing concerns.

As community partners, both the city and the university are committed to identifying long-term affordable housing options to support our communities’ and neighbors’ needs.

All of us are in this for the long haul for the betterment of Sacramento.

This op-ed by Mayor Darrell Steinberg and Chancellor Gary S. May appeared first in the Sacramento Bee, then in Dateline UC Davis.