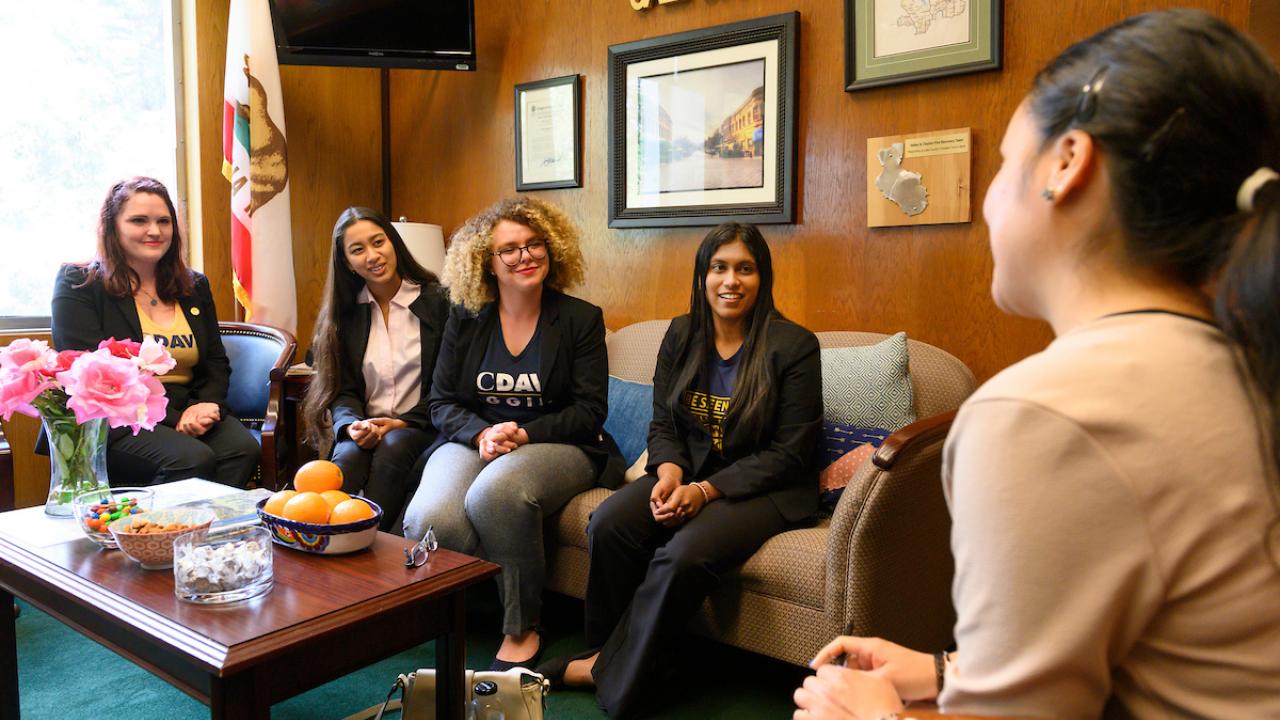 If you’re a prospective political science student, you might be hoping for a first-hand view of what a student experiences in the major. Sadia Sadiq, a first-year undergraduate political science major, answered several questions to shed light on the program. Sadiq shared that the political science community at UC Davis is special for at least four reasons:

Why did you join the political science major?

Sadia Sadiq: I joined my major, political science because I am so passionate about political issues and elections. After the 2016 election, I became fascinated with the fiery debates on the liberal-conservative spectrum and I began following political news intently. By majoring in political science, I wanted to gain a holistic knowledge of the American government and voting system so I can analyze political issues in a more in-depth manner.

What has been your most enjoyable class in the major so far? Why?

The political science major and minor draw upon a variety of fields in the social sciences, from sociology, media studies and psychology to history and philosophy. The program prepares graduates for a variety of jobs that value in-depth analysis and effective strategizing, including managerial consulting, law, education and journalism.

My favorite class in the major so far has probably been POL 11A “America Decides” taught by professor Isaac Hale. The class covered the 2020 election. I love it because it is so relevant to current issues and events, and it helps me understand them through political concepts and theory. In most other classes, I ask myself, "When will I use this in real life?" I have never found myself asking that question with this class because it provides me with knowledge I can apply on a day-to-day basis when I watch the news.

What other clubs or opportunities have you found on campus to engage in your major?

I am passionate about writing about political issues, so I joined the Davis Political Review to write for their news magazine. It gives me the opportunity to write about issues and provide analysis in an opinion-based manner, which I often don't have the freedom to do in my regular classes. I love the news magazine and the fact that actual students can contribute their opinions of events happening in this current political climate.

What is the culture of the major? What are the other students like?

The major is not at all competitive and is very collaborative. Students will never hesitate to share ideas on concepts or to help walk you through something complicated. Students and teachers also never talk down to you or make fun of you for a lack of knowledge or differing opinions, and actually enjoy educating their peers. The introductory classes are quite large in terms of the number of students, but they feel very tight-knit. Every student respects each other's opinions and finds value in their contributions to the class, so political science classes have a warm and welcoming environment. [The program] is also definitely research-heavy, and I find myself participating in multiple studies per month at the request of teachers.

Have you made close connections with professors or advisors in your major?

Our campus is not only right inside the Central Valley, but also close to both San Francisco and Sacramento. Students can find internships and jobs in the capital city of the nation’s most populous state. UC Davis students have a close-up view of law, labor and governance, as well as how rural economies and their participants think, work and mobilize. With a highly esteemed faculty, UC Davis has an edge over many other schools in the country, ranking fifth in the state and 17th in the nation per U.S. News and World Report.

Unfortunately, I haven't, because all classes are online [Editor’s note: temporarily because of the pandemic], so I don't have as much of an opportunity to make lasting connections with teachers and advisors. However, many of my teachers have a special place in my heart because of how passionate they are about the subject, so I intend on taking their upper-division courses later on.

What do you hope to do with your major after graduation?

I hope to go to law school and become a constitutional lawyer. My major has allowed me to interpret and analyze the Constitution, and I would love to continue that interpretation as a profession in law. Later in life, I want to use the knowledge I've acquired through my major to pursue a career in politics.

To explore career options for political science majors, check out the Internship and Career Center.

Jarrod Baniqued recently graduated with a major in communications and a double minor in political science and professional writing. He has interned at The Davis Enterprise and the Bulosan Center for Filipino Studies, and is strongly considering career opportunities in political journalism and entertainment.