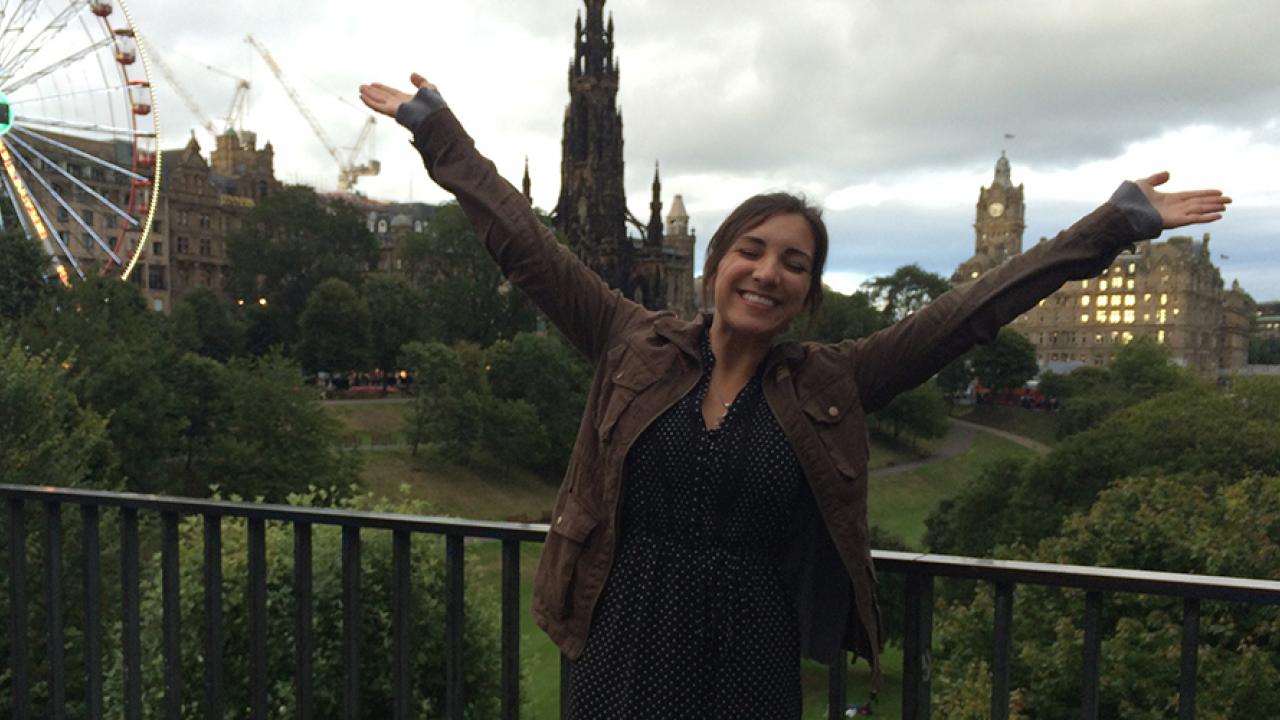 Myriah Smith ’16 is an advocate for human rights. As an international relations major in UC Davis’ College of Letters and Science, she chose the peace and security track because it resonated most with her passion for securing the rights of people affected by conflicts, political violence, and ethnically/religiously targeted discrimination. But Smith knew what she wanted to study long before she was a student at UC Davis.

“I grew up in a multiracial family, and my family's celebration of diversity sparked my interest in other cultures at an early age, which led me to study international relations," Smith said. "My family's experiences with discrimination and hardship also influenced this. One of my great grandmothers was a Holocaust survivor and my paternal grandfather grew up as a mixed Black-Indian in Guyana while it was still a British colony."

“I felt deeply compelled to help others and made the decision to work toward a career that would allow me to fight for the rights and well-being of those suffering through conflicts, focusing on policy, politics, and international security.”
— Myriah Smith, '16 International Relations

One moment, in particular, affirmed this passion for Myriah. It was in her European History class when they covered World War II and the Holocaust. Learning about the atrocities of the Holocaust hit very close to home for Smith.

“It was especially unsettling to me, as my great grandmother was a Holocaust survivor. She was the only person in her family to survive, and only did so by hiding in the forest for years. Her story, combined with the story of millions of others that I learned about, resonated with me deeply. I saw my family and my heritage in the stories of others. As I continued through high school and into college, and continued taking classes that covered various conflicts with human rights abuses, I saw more connections and parallels between my family and heritage and the experiences of others, and I wanted to do something about it. So I decided to pursue a career in human rights,” Smith said.

This path eventually led her to study abroad on the University of California Scotland Parliament Internship (SCI) program, which allowed Smith to travel and explore other cultures while taking part in an extremely relevant internship opportunity. During the program, Smith served as an intern to two Members of the Scottish Parliament (MSP), Rhoda Grant and David Stewart of the Highlands and Islands to the Scottish Labour Party. Beyond managing emails, taking phone calls and scheduling events, she helped draft and write parliamentary motions, press releases, social media posts, and speeches. She also had the opportunity to attend conferences and events and wrote an article on behalf of one of her MSPs, which was published in a local newspaper.

“When I came across the Scottish Parliament program, it seemed the perfect fit. The program offered an internship, but also a study abroad component as participants took two courses to supplement the internship. Being interested in politics and international organizations, the opportunity to not just complete a political internship, but to do so abroad, was a great opportunity for me.”

Scotland has a special place in Smith’s heart. Her maternal grandfather had traveled to and from Scotland for his work for many years and had always told stories about how much he loved Scotland.

“Before I ever stepped foot into the country, I already had a strong connection to Scotland. The SPI program was truly a triple threat for me: internship, study abroad, and the opportunity to travel to a country I loved,” she said.

Smith wasn’t without her doubts about being away from home for so long. Previously, the longest she had been away was two weeks; four months in Scotland seemed daunting. She suffered from imposter syndrome and the experience forced her to have faith in herself. Once the program started, however, her doubts quickly went away: Scotland was now home.

“I think since studying/interning abroad was such a huge goal for me and when the time came for it to happen, it felt surreal," Smith said. "However, when I did arrive and settle into the program, I not only found that I was well-qualified, but that the role provided me with great independence and an opportunity to grow and use my current skills.”

Smith’s adventures didn’t end with Scotland. After recently graduating from UC Davis, she volunteered at a youth advocacy and development NGO in Phomn Penh, Cambodia for five months. There, she wrote grant proposals and helped develop programs to empower the Cambodian youth. Now she works as a program assistant at a private foundation in San Francisco, managing, researching, and evaluating grants across the foundation’s various initiatives. She is also a Jeremiah Fellow with Bend the Arc, a progressive political organization, where she advocates for immigrant rights and justice through community organizing, developing political campaigns to end family separations and advocating for a new and just immigration policy. Looking into the future, she hopes to get back into an international career with the confidence gained from her global learning experiences at UC Davis.