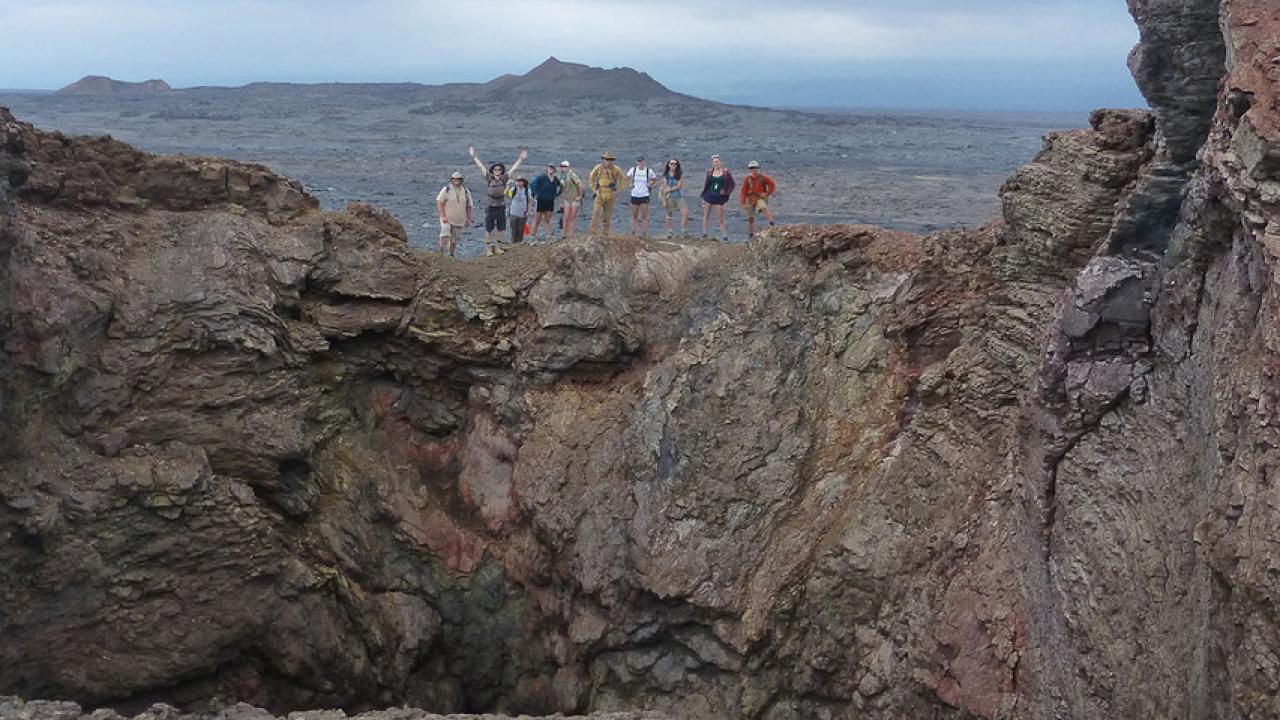 Geology majors tend to have a few common traits. They are curious about how our planet works, they want to study a rigorous science, and they want a challenging career that is relevant to society.

Many of them simply love being outdoors in wild places, while others want to combine their talents in biology, chemistry, physics or computers with an understanding of Earth and the environment.

If you feel this description fits your personality, then consider exploring geology for your major.

The easiest way to begin is to take one of our introductory courses and get your feet wet learning about the Earth, the oceans, earthquakes, volcanoes, dinosaurs or the solar system.

Other options include courses in the history of life, the geology of California, the global climate system and the landscapes of our national parks.

Most incoming students to UC Davis haven’t been exposed to the wide variety of topics within the geosciences, and many of our current majors made their decision to become geologists based on these introductory classes. A typical response is “I didn’t realize that this stuff was so interesting!”

Geology students connect with our faculty

The major in geology is taught by a diverse group of 23 faculty members in the Department of Earth and Planetary Sciences. With about 90 students in the major, you’ll find ample opportunities to interact with your instructors. The department prides itself on the quality of classroom instruction and the high degree of personal connections between students and faculty.

Many of our majors conduct research — some work with mass spectrometers in geochemistry labs, while others deploy geophysical equipment in remote parts of the American West. Others learn computer modeling of deep Earth processes or use the 3-D visualization laboratory.

Some students have worked in Alaska, Argentina or western China as field assistants for graduate students and faculty. Undergraduates are encouraged to participate in research and only have to ask to become involved.

Career paths for our majors

The skills you’ll learn as a geoscientist are transferable to a wide array of careers. Some of our geology majors continue their education in graduate school, while others begin their careers directly after graduation.

The most rapidly growing employer of young geoscientists is the environmental services industry, a diverse field with locations throughout California and around the world.

Many of our alumni go on to gain their licenses as “professional geologists,” a prestigious title as well as a lucrative one. Other graduates develop careers with the federal or state government, the information service industry, nongovernmental organizations and public school systems.

Alumni also have gone on to medical school, environmental law and finance. Many of our students have completed graduate degrees and are now university professors.

A sampling of alumni career paths

Jaime Delano ’13: After graduation, Jaime went straight to a five-month internship with the U.S. Geological Survey in Menlo Park before beginning a master’s program at Western Washington University. She published the results of her research in a prestigious journal upon graduation in 2016 and then joined the USGS Geologic Hazards Science Center in Golden, Colorado. There she works with other geoscientists to assess the ancient record of earthquakes on active faults to forecast the potential for future earthquakes.

Ivan Carabajal ’13: Ivan did senior thesis research in the northern Sierra Nevada and then worked for the National Park Service as a hydrogeologist, paleontologist and outreach coordinator. He used his public speaking skills (honed while a student at UC Davis) to give talks to middle-school students on the value of geology and paleontology research in our national parks and monuments. After a stint at a geological consulting firm, Ivan finished a master’s degree in 2017 at the University of Cincinnati. He is continuing on for his Ph.D. at Cincinnati, where his research is focused on geoscience education and defining barriers to inclusion for students with disabilities.

Mike Poland ’97: While an undergraduate at UC Davis, Mike developed a keen interest in volcanoes and capitalized on his passion by earning a Ph.D. at Arizona State University in 2001. He worked for the U.S. Geological Survey as a research geophysicist and volcanologist at the Cascades Volcano Observatory and Hawaiian Volcano Observatory, where he used satellite-based data to assess possible precursor events of active volcanoes that may indicate imminent eruptions. In 2017, he assumed the position of scientist-in-charge of the Yellowstone Volcano Observatory, which monitors one of a handful of “supervolcanoes” on Earth.

If you realize that one or two introductory classes have piqued your interest in the geosciences, make an appointment to speak with our staff advisor, Mandy Hanou. She’ll help you with a plan of action, get you in contact with faculty advisors and be your personal guide through the major.

In 2015, Forbes magazine reported that “an impressive 95 percent of geologists out of 220,000 polled said they were satisfied with their major, the highest of any other sampled.” If you’d like to be one of those students who are passionate about what they’re learning, then consider geology as your major. Let the Earth be your laboratory.

David Osleger, a lecturer with security of employment in the Department of Earth and Planetary Sciences, received the Academic Senate Undergraduate Distinguished Teaching Award in 2012.