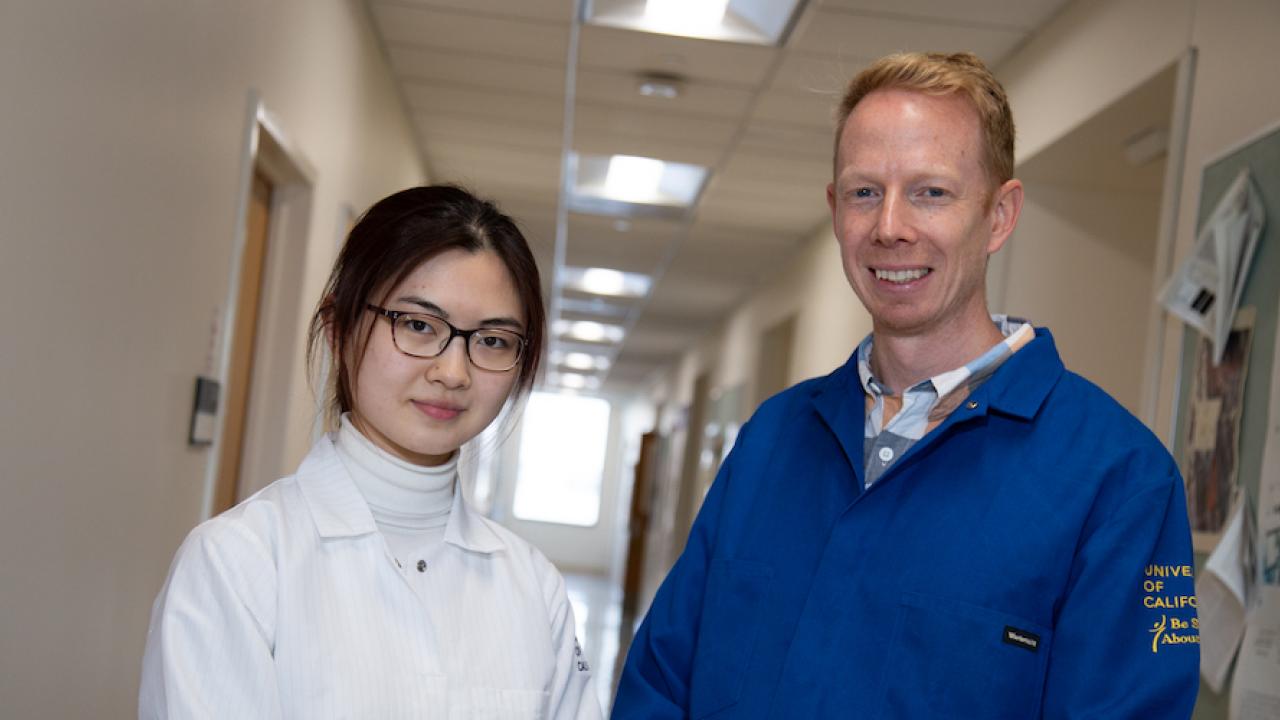 Undergrad Research: Exploring the Postal Service of Our Cells

This story originally appeared on the College of Biological Sciences’ blog.

Part of the college experience is figuring out what you don’t want to do. Passion, like discovery, is found through trial and error. Biological sciences and psychology senior Wenzhe Li rotated through two labs at UC Davis before finding a muse in cytoplasmic dynein, a motor protein used for transport within cells.

“Dynein is like the U.S. Postal Service of our cell, but it works a lot better,” said Li, who conducts research in the lab of Assistant Professor Richard McKenney, Department of Molecular and Cellular Biology. “It works a lot, lot better.”

The protein is important for a large variety of movements within our cells, McKenney said. Defects in dynein cause diseases of neurodevelopment and neurodegeneration. “A fundamental understanding of how dynein motors work is of high interest for human health,” she said.

In McKenney’s lab, Li studies the adaptor proteins that cytoplasmic dynein uses to ensure its Jill-of-all-trades functionality. Aided by her interest in psychology, Li aims to link cellular and molecular biology processes to mind and behavior. For her work, she was awarded the Ronald and Lydia Baskin Research Award.

“Working in a lab while taking classes for my two majors is not easy, and sometimes I become overwhelmed by the stress and self-doubt,” said Li. “I am grateful for the recognition I have received for my research, and I am motivated to work even harder as I start my next level of education as a graduate student.”

Crossing the Pacific for UC Davis

Li traces her interest in molecular and cellular biology back to high school. Raised in Shanghai, China, she recalled taking an elective in the subject and being awed by an experiment where the class added a fluorescent tag to the bacteria Escherichia coli. The simple experiment illustrated to Li the power of molecular science and technology.

“When I’m doing these experiments, I feel excited from the deepest part of my heart,” she said.

When it came time to explore universities, Li traveled across the Pacific Ocean. Already interested in biology, she explored schools with a breadth of research areas in the life sciences. UC Davis fit the bill.

“When I first came to college, I didn’t know what exact topic in biology I would be interested in,” said Li. “Thankfully, UC Davis has outstanding resources in almost every biological field.”

Curious, Li traversed a few labs. She studied cichlid fin morphology with postdoctoral researcher Samantha Price in Professor Peter Wainwright’s lab, Department of Evolution and Ecology, and worked for the Personality and Self-Knowledge Lab, run by Professor Simine Vazire, Department of Psychology. The Personality and Self-Knowledge Lab aims to gauge how well people perceive themselves and others through interviews.

While neither topic tugged on Li’s research heartstrings, she found herself more and more intrigued by her molecular and cellular biology classes.

“I set out to find a research experience that would allow me to harness this growing interest,” she said.

“It sounded like interesting stuff that I really wanted to explore,” said Li. “So I sent him an email.”

“Wenzhe came to the lab with no formal training, and she quickly picked up the molecular biology and biochemistry techniques we utilize for our experiments,” said McKenney. “I’m very impressed with her determination and drive to succeed in the lab.”

An eye in the microscopic sky

In McKenney’s Lab, Li combines her training in molecular biology, biochemistry and single-molecule microscopy to investigate the mobility of cytoplasmic dynein.

“Wenzhe’s project aims to dissect the functions of one of the protein subunits that compose the dynein machine,” said McKenney, noting that Li is creating dynein complexes that lack specific protein molecules and then gauging their functional output.

Li is particularly interested in two dynein adaptor proteins called LIS1 and NudEL/Ndel1, which are involved in central nervous system formation. At the workbench, she can watch how her experiments affect cytoplasmic dynein’s movement along the cell’s roadways, known as microtubules. Like a helicopter covering I-80 traffic, the single-molecule microscopy technique gives scientists a bird’s-eye, high-resolution view into the molecular dynamics happening below.

Like a molecular letter from the dynein post office, Li already has her next steps mapped out. She’ll continue on at UC Davis as a biochemistry, molecular, cellular and developmental biology Ph.D. student in the fall.

“I can get submerged in papers,” said Li. “When I’m doing my experiment, most of the time I talk with my principal investigator, and he can give me a really clear direction of the next steps I should take.”

Li wants to cultivate a similar understanding, but she also wants to explore different models for molecular and cellular research.

The cell is “very complicated and crowded,” Li said. “I’m interested in exploring different labs using different model organisms because I find that they are really fascinating.”

With the breadth of model organisms at UC Davis, she’ll have no trouble finding new biological systems to explore come fall 2019.

"I see all the characteristics in her that are required for excellence in this line of work: curiosity, motivation and fearlessness to try new things,” said McKenney. “I have no doubt she will make a stellar graduate student and future leader in the STEM field.”

Greg Watry is a science writer and communications specialist at the College of Biological Sciences.