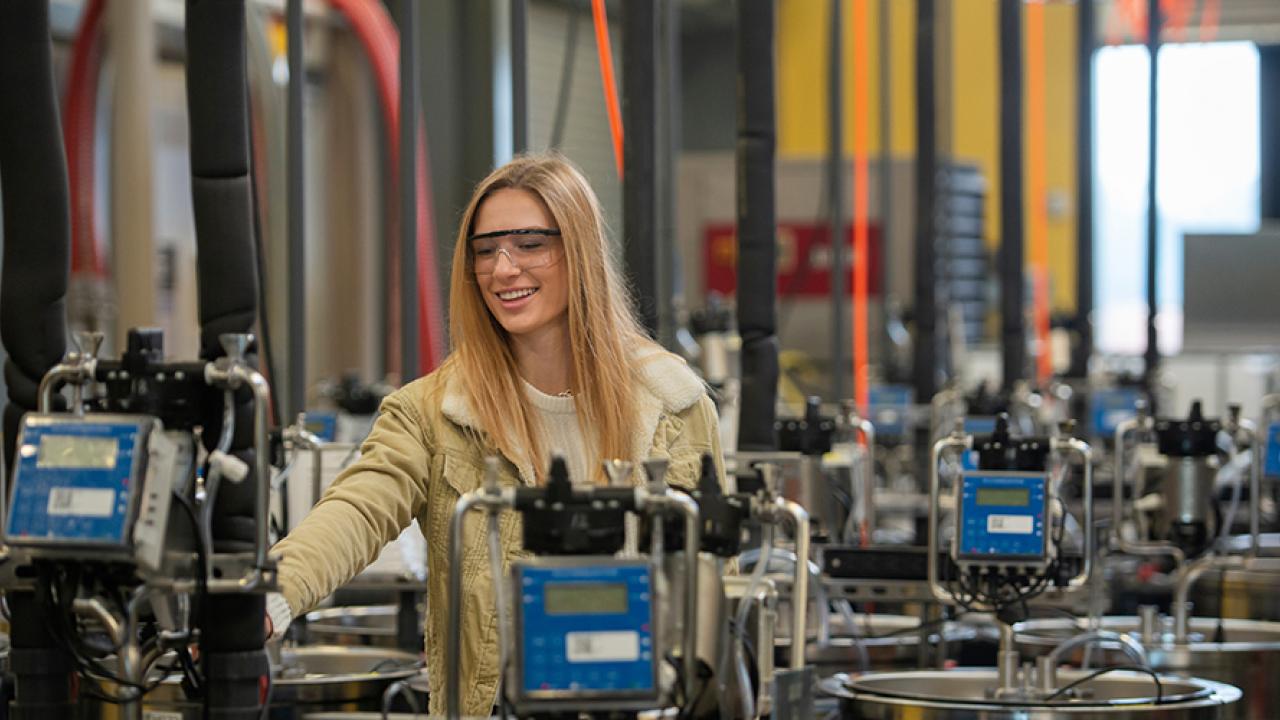 5 Students Turn Their Interests into Internships

Trying Out a Career

This story was originally published in UC Davis Magazine on Dec. 16, 2019.

Four years ago, they came to UC Davis eager to begin their college careers. Now, with two quarters remaining, these students are looking forward. As seniors, they are gaining valuable professional experience and putting their skills to work through varied internships. Here are a few members of the Class of 2020.

Nikki Moslehi spends her school day schooling others. Moslehi, a fourth-year sustainable environmental design major and education minor, interns from 2 p.m. to 6 p.m. every day at Redbud Montessori in Davis.

She has worked at the preschool since her sophomore year and was promoted from teacher’s aide to after-school supervisor her junior year. Moslehi, a sustainable environmental design major, originally pursued an internship in education for hands-on experience. “Learning through application is so useful,” she said. “And I love the kids. I don’t think of it as a job. It’s something I truly enjoy.”

As the after-school supervisor, she teaches the children outside. She takes them on nature walks and teaches them about local plants. “I’ll tell them to find sticks that look like a letter,” Moslehi said. “And these 4-year-olds will come to me and explain these complex letters that they’re seeing in nature! They make layered connections, tying nature with reading. It makes them feel very capable and motivated.”

Now, she has a new goal: developing a curriculum and designing an outdoor play area so the preschool can become a Certified Nature Explore Classroom, according to a national nonprofit that aims to incorporate nature into children’s daily learning. “Right now I’m compiling research of the program’s importance and the benefits to child development. Winter quarter will be the interviewing phase. I’m going to go to all the Certified Nature Explore schools in Northern California, interview their staff and get their input,” she said. “Spring quarter will be the design implementation phase.”

An average day is a busy one. Moslehi has prioritized her internship by enrolling in summer sessions. “It allows me to take fewer classes during the year,” she said. “I can spend more time at the preschool.”

To Moslehi, the experience is worth the commitment. “Watching a child realize that they have no limitations, watching them thrive and flourish. That inspires me.”

Moslehi said she plans to pursue a career in education. “My major has given me a foundation,” she said. “I’m interested in the design of the classroom, the indoor and outdoor experience, the school as a whole. I’m really excited to see how it goes hand in hand.”

An interest in sports led Robin Duka toward a career goal. Duka, a fourth-year managerial economics major and communication minor, is a marketing intern for UC Davis Athletics. Now, Duka attends every home football game, in addition to other sports, and runs marketing promotions to increase fan engagement.

“I’ve always been a huge sports fan. I would love to be a general manager,” said Duka, who is also a barista at the CoHo and a part of the non-profit Camp Kesem, a national organization that supports children with a parent who has cancer.

Duka has interned for the marketing department for two years now, and his role has evolved over time. The San Ramon native began in marketing, ensuring that all the sponsored messages were properly displayed during games. He then transitioned into more media-heavy roles. “I took on the scoreboard role — all the graphics you see during the game to pump up the crowd,” explained Duka. “From there, I transitioned into music.”

Music has been a hobby of Duka’s for a while. At the age of 6, he began to learn how to play guitar. Inspired by George Harrison, lead guitarist of the Beatles, Duka was determined to master the instrument. “I’ve gone from singing songs in my room to actually writing my own songs,” said Duka. “I’ve even formed a makeshift band with my friends.”

That affection for music is evident in his role at Aggie Stadium. “The music you hear when you go to a game, that’s me,” Duka explained, adding that selecting music to engage both the crowd and the players is a balancing act, but one he said he enjoys. “It feeds my two passions.”

Duka credits his internship for teaching him about more than sports. “It’s broadened my horizons,” he said. “My work this year, both with music and the scoreboard, has been media-focused, which is a new avenue for me. Because of this internship, media is an interest of mine. I don’t have a defined plan yet, but I have a better sense of direction.”

Nina Hodgson changed her educational track for a hands-on experience in the outdoors. Sophomore year she switched her major from biomedical engineering to viticulture and enology. “I wanted a job and a future that didn’t involve sitting at a desk all day,” said the fourth-year Monterey native. “Viticulture and enology is the complete opposite of that. I work outside every day.”

Hodgson now interns at Great Bear Vineyards in Davis as a tasting room associate. She started in September, during harvest season, and spent her time picking and destemming grapes at the vineyard. Fermentation began in October, the period of converting sugars in the grape juice into alcohol. “I went every day for over a month after my classes,” she said. “Now that fermentation season is over, I focus primarily on wine tasting.”

As a tasting room associate, Hodgson spends weekends at the winery educating guests about Great Bear wines. “I give spiels about each wine for 5 to 10 minutes, and then I pour it for people,” explained Hodgson. “It’s really fun. The people who come in for wine tastings are always in the best moods; you meet such lovely people.”

Hodgson said she values the mentorship she has received from Jenny Meadows-Smith, co-owner of Great Bear and winemaker (and a graduate of the UC Davis Winemaking Certificate Program). “I got to work alongside Jenny for the entire harvest and fermentation process,” said Hodgson. “Jenny will stand next to me and explain the steps and the reasoning behind each aspect of the process. She taught me how to measure pH levels and sugar content and how to make adjustments. And she learned from the same professors as I did!”

Hodgson, still unsure about her specific plans after graduation, is confident that a career in wine is in her future. “Most people in my major will work a harvest like I did to figure out what aspect of the business they want to be in. I want to be on the winemaking side of things, so an assistant to the winemaker or working in a wine lab,” said Hodgson. “Quantitatively analyzing the compounds in wine is interesting to me.”

Small things can have big meanings. That’s something Shayan Kaveh has learned during his time interning at the Genomic Variation Laboratory on campus. As an intern there, the Oakland raised fourth-year conducts eDNA extractions, a relatively new technique focused on environmental deoxyribonucleic acid.

“I intern for phD student, Ann Holmes, which is amazing,” said Kaveh. “I’ve gotten to do a mixture of fieldwork, as well as a lot of lab work.”

Kaveh has interned at the lab for two quarters. He spent the summer conducting ecological research in Yolo Bypass on the bat population, using eDNA to determine their eating patterns. To do so, Kaveh extracts and conducts processes on eDNA found in bat feces. “What the bats are eating is valuable information to local rice farmers and other people in the area,” explained Kaveh. “ If we can determine what they are eating, perhaps rice farmers will invest in features that make the area more habitable for bats, so they can continue to provide pest control for the farmers.”

In addition to their work in the Yolo Bypass, Kaveh and the team have tracked the fish species in Putah Creek and extracted pollen eDNA to discover bees preferences in the Sierra Nevada. “I’ve got to have a lot of different experiences,” said Kaveh, who recently spent time in the Delta by Suisun City, tracking endangered and invasive fish species in the area. “Going through the Delta on a boat was insane. I didn’t know that was what a wetland actually looked like! It blew my mind.”

Kaveh credited the welcoming environment of the lab for much of his success. “Ann has been a mentor, a guiding friend and a boss,” said Kaveh. “Being around such welcoming people in a more casual setting has made me more confident. Even as an undergraduate intern, I’ve always been included in the dynamics of the lab. It’s a cool space.”

The environmental toxicology major is now looking into graduate school, preferably for geography. “I want to study the intersection of toxicology, environmental science, and ecology in a human context,” he explained. “Through my internship, I’ve learned skills that I wouldn’t have in class. I feel equipped for whatever comes next.”

For Odessa Runyan, an internship offered a front-row seat in the political arena. The Ojai native is one of California Sen. Kamala Harris’ interns, working out of the Sacramento office — while juggling classes, a job at the UC Davis School of Law and her duties as president of the club volleyball team.

“It’s a lot. I’m really, really busy,” Runyan said laughing. The political science public service major was set on studying politics and policy since her senior year of high school. She plans on attending law school and chose the internship to gain experience for both law school and a future in policy work. Now, Runyan has dedicated two days of her week to the position.

“I go to work early in the morning and do an hour of class work before I go in,” she said. She condenses her class schedule to Tuesdays and Thursdays to make it work.

With a handful of other interns, Runyan spends the work day answering phone calls, tracking bills and vetting organizations that express interest in working with the senator. “A big part of the internship is keeping track of her legislation. If she’s introducing a bill, we keep track of where it is, what people are saying about it, what committee it’s in — the stages of her legislation,” explained Runyan. “It’s important to conduct yourself when you’re representing her, that’s the formality of the internship. You have to convey her policy positions, what she actually can or can’t do to help when a constituent asks for help.”

And the work isn’t confined to the Sacramento office. “We get to represent her office, which is really exciting. There’s a variety of mixers and events we can go to.”

Runyan added that her internship is applicable to her classes and major. “In classes we refer to current events for our studies, and one of my favorite internship duties is watching hearings. It’s really cool.”

The position also has given her a new perspective. “Before this internship, I wouldn’t think to call my senator to tell them my point of view,” she said. “But for a lot of people it’s one of their last resorts and for others it’s their solace.”