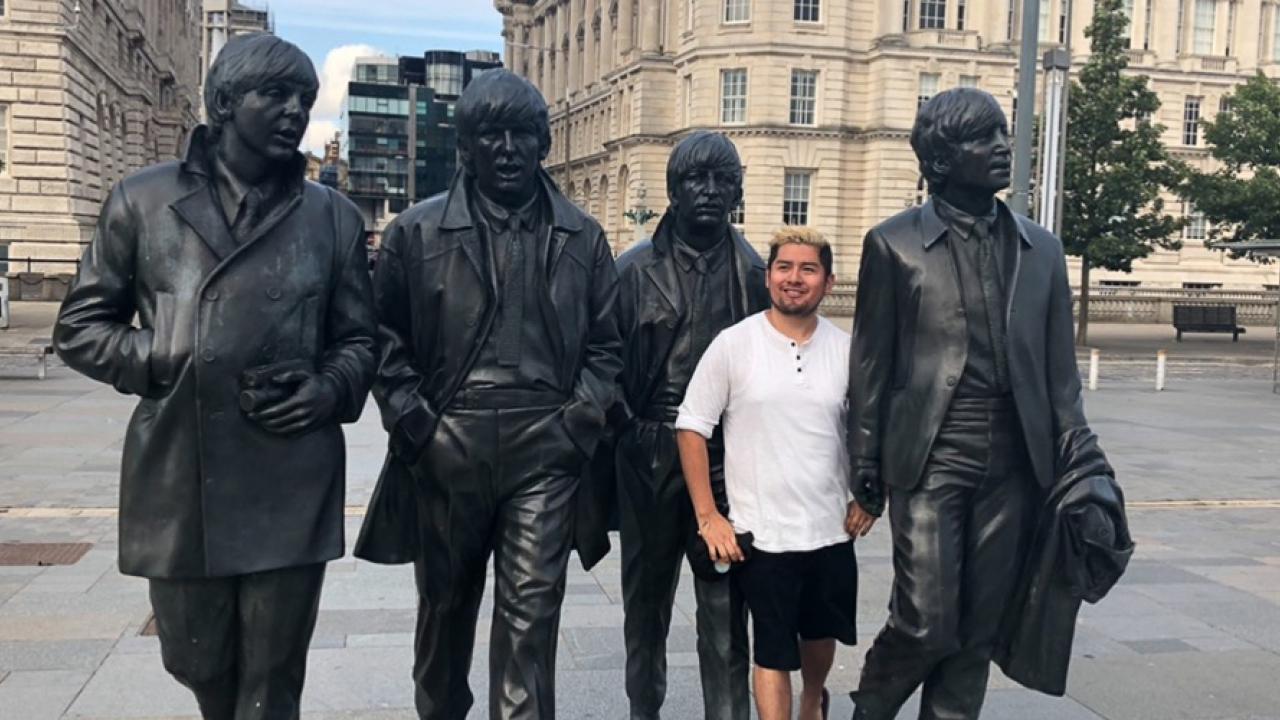 From his first days at UC Davis, Adrian Gonzales '20 knew he wanted to study abroad. This past summer, his dream became reality as he took his education across the pond, traveling to the United Kingdom to study organizational management amidst the international business world.

A transfer student from San Joaquin Delta College, Gonzales had been taking a variety of courses in Sociology, Economics and Business, struggling to find a major that fit all of his interests. Upon arriving at UC Davis, he was concerned that he would need to double major. However, he quickly discovered the Sociology—Organizational Studies major which combined his interests in Sociology and Economics and offered him a path into business.

As a Sociology—Organizational Studies major, Gonzales studies the ways in which complex and formal organizations such as governments, economies and workplaces operate and how they influence people around the world.

“The sociological perspective is crucial for working in today’s multiethnic and multinational business environment," he said.

He is also completing a minor in Technology Management, a program which enables the development of both soft skills, such as intercultural communication, and hard skills, such as preparing financial budgets and forecasts.

While his academic and career goals emphasize diverse viewpoints and multicultural literacy, his personal desire to explore the world and broaden his perspective has been largely inspired by his family. A first generation college student and the son of Peruvian immigrants, Gonzales’ upbringing has been immensely impactful on his educational pursuits.

“Thanks to my parents there never was a ceiling for me or my sister. They constantly supported us academically and through our extra-curricular activities,” Gonzales said. “College was never an if, it was a guarantee, and I attribute that to my parents.”

Gonzales’ older sister graduated from UC Berkeley in 2015, and has offered unwavering support and advice during his undergraduate experience. Her participation in a study abroad program while in college inspired him to pursue one himself.

Gonzales set to work early on to discover if it was possible for him to take his education abroad while at UC Davis. Having transferred, he was initially concerned that he would be unable to find a study abroad program that fit in with his academic plan. By working closely with his major advisor, he found a study abroad program that offered credit towards his degree, helping him get ahead on his classes.

Gonzales enrolled in the Perspectives in Global Management Summer Abroad program, leading him to spend the Summer of 2019 in historic Edinburgh, Scotland. The four week program offered him the opportunity to complete eight units of Agricultural and Resource Economics (ARE) upper-division coursework. This was noteworthy as he knew that on campus, one of these classes usually had upwards of 200 students. Meanwhile, his program only had twenty-four students, allowing him to have a more in-depth engagement with the material and to establish a close working relationship with his professor, who his class called Uncle Jerry.

“We became like a tight-knit family which was one of the most appealing things about study abroad. You get that small class environment and you really get to know your professor as a person,” Gonzales said.

But small and personal class sizes were just the tip of the iceberg. The program provided a tangible focus on the cross-border economic dynamics of Europe, offering examinations of the workings of international markets through guest speakers and career-oriented site visits. In particular, Gonzales recounted their four-day trip to London, England for a private, guided tour of the Bloomberg European headquarters.

“It was honestly one of the most unique and unreal experiences I’ve ever had. If I were to have traveled to London by myself, I would never have experienced that," he said. "To have such a personal tour of an incredible company with a group of like-minded students allowed us to get a glimpse of what our futures may hold."

While in London, Gonzales and the other students in his program had yet another unique experience, though this one was completely unexpected. The UC Alumni - UK Network had reached out to Professor Jerry Lundblad, the program instructor, because they, too, happened to be gathering in London.

Enter an unprecedented 4th of July barbecue as Gonzales and his peers were able to network with UC alumni thousands of miles from California, learning about their experiences after college. They even met a UC Davis alumnus who had previously taken classes with Professor Lundblad during his own undergraduate years.

But this still wasn’t the most unexpected thing that happened while Gonzales was studying abroad. On an outing to visit Hyde Park in London, his class found themselves at a massive outdoor concert. “All of a sudden we hear the theme from Titanic start playing and realize Celine Dion is performing live,” Gonzales said. “Everyone started going crazy.”

Of the program overall, Gonzales expressed how rewarding it was to be able to more fully experience and consider what it would mean to pursue a career across the globe. It also reinforced how important global learning opportunities are when stepping into an international field, a reality true not just of business but of almost any discipline in our increasingly globalized society.

After the program ended, Gonzales’ parents joined him overseas and he had the opportunity to show them Edinburgh, his home away from home. As their first time visiting Europe, they explored a few other countries, including France and Greece.

Now, months away from graduation, Gonzales is beginning to consider his next steps after college. While nervous to step out of his identity as a student, he’s excited to join the workforce and have a greater impact.

Based on the impact Gonzales has already had during his undergraduate career, there’s no doubt that he will continue to have a powerful influence on the world around him. Currently, he works as a Study Abroad Administrative Assistant and Advisor at the Global Learning Hub, supporting other students at UC Davis to achieve their own goals of studying abroad. He has also been a volunteer with the Latino Community Foundation in San Francisco since March of 2016. As a native Spanish speaker, he’s helped with their campaign to mobilize the Latino vote and to host major events such as the Latino Policy Summit. The opportunity has helped him further embrace his own heritage while giving back to Latino communities in need. Gonzales is also a Marketing Intern for UC Davis Athletics.

In the future, Gonzales aspires to bring his education in sociology and economics into the sports industry. He would like to work for a collegiate or professional sports team, whether in community outreach, business management or anything else that allows him to apply his skills while making a difference.

Gonzales looks forward to traveling more after college and continuing to broaden his knowledge of the world. His experiences in the UK have left him considering a career abroad, as well. Perhaps he will find himself as a UC alumni overseas one day, connecting with future students also passionate about global education.

Above all, Gonzales is excited to make his family proud this Spring. “As a senior, and graduation closely approaching, when my name is called on that stage it’s not just me graduating, but my whole family,” he said.