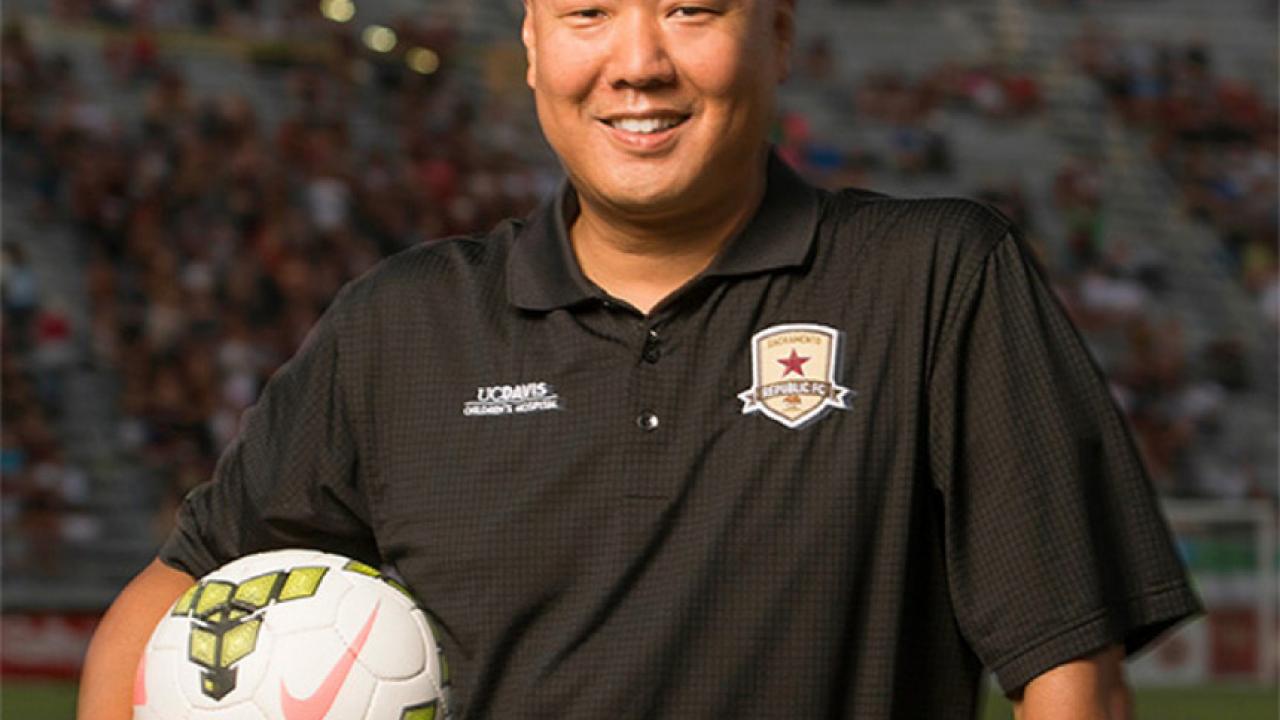 Editor’s note: This #AggiesAtWork story is presented here as it was first published in 2015. Brent is still working as vice president of corporate partnerships at Sacramento Republic FC.

But being a “relationship guy” is more than what Sasaki does to earn a living. Connecting with people is a passion and personal strength, whether it’s for his championship-winning team, as an involved parent on his kid’s soccer team, or as a life member and board member of the Cal Aggie Alumni Association.

UC Davis remains one of his most reliable relationships, he says — both the Internship and Career Center, which helped jump-start his professional life, and the CAAA, which offers resources he’s called upon when hiring staff of his own.

As an undergrad, upon realizing pursuing law wasn’t his passion, Sasaki visited the UC Davis Internship and Career Center. He had assistance applying for an internship with Marine World (now Six Flags Discovery Kingdom), where he was introduced to sports marketing and sponsorship events by helping manage the Budweiser water ski tournament. After that, he was hooked.

“I knew then, this is the path I want to take,” Sasaki said. “Because of that internship, long story short, it carried me to meet new people in the Bay Area and in Sacramento. Every connection I made carried me into the next job, which led me to where I am now. I owe a lot to that career center — that job catapulted me into my career.”

From Visa to Vitaminwater to the Sacramento Kings and on to the world of professional soccer, Sasaki has remained connected to his alma mater. While working as the Kings’ director of partnership marketing, he established an internship program for college juniors and seniors and connected with several UC Davis students through CAAA and the UC Davis athletics department.

He brought five students on board, all of whom have gone on to have successful careers — one with Sac Republic FC and three in the sports marketing realm (the last is busy playing professional volleyball in the Philippines).

He wanted to return the favor, he said, given the amount of guidance he received as an undergrad. And he knew his fellow Aggies were a strong bet.

Sasaki is one of a dozen Aggies who work for the Republic FC, including president and co-founder of the team, Warren Smith. Together, these Aggies helped the team win the USL Championship during its inaugural season and become an icon for the Sacramento region.

It’s clear that wherever his professional path takes him, Sasaki will always be a member of Team Aggie too. And he shows his appreciation in one of the finest ways: by being a resource for, mentor to, and employer of fellow alumni.