Where on Earth Is the Salish Sea?

Survey: Most Washington and B.C. Residents Don’t Know They Live Alongside the Salish Sea

Less than half of the people in Washington and British Columbia have heard of the Salish Sea, even though they live alongside it.

That’s according to a recent report from the SeaDoc Society, a program of the University of California, Davis’ School of Veterinary Medicine, and Oregon State University. The study reveals that only 5 percent of people in Washington and 14 percent of British Columbians can identify the Salish Sea — the marine ecosystem that spans the United States-Canada border and includes both Seattle and Vancouver. 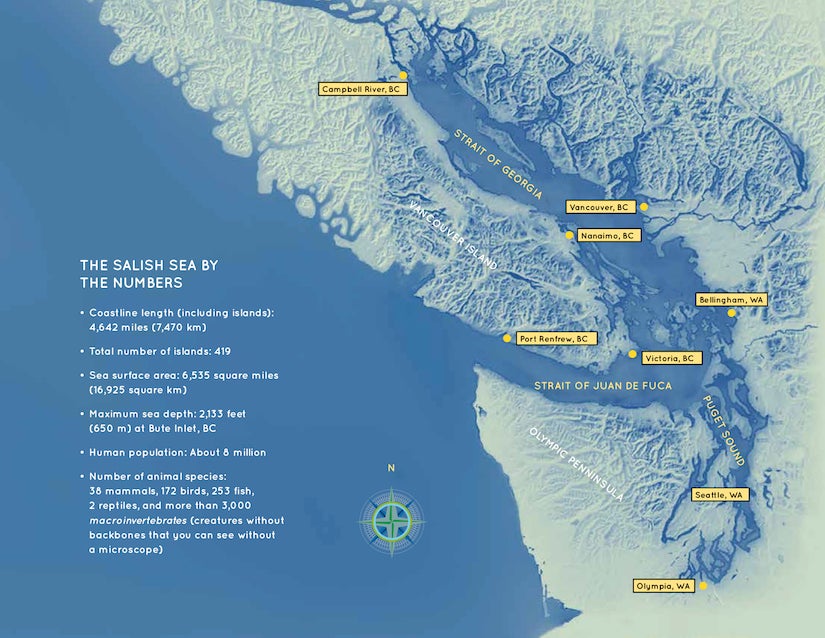 The study surveyed 2,405 residents of Washington and British Columbia to measure familiarity with the name and geography of the Salish Sea, which is home to more than 8 million people. It spans from Olympia, Washington, in the south, to Campbell River, British Columbia, in the north, and includes Puget Sound, the Strait of Georgia and the Strait of Juan de Fuca.

“The results of this study are both fascinating and sobering,” said Markus Naugle, regional director of SeaDoc Society, which is part of the UC Davis Karen C. Drayer Wildlife Health Center. “With targeted efforts in education, outreach, and collaboration, we have a tremendous opportunity to make great strides towards our goal of ‘everyone asked knows the Salish Sea.’”

What’s in a name?

How residents identify with and understand a place can inform their behavior toward that place, including efforts to protect it.

The Salish Sea is home to two of the fastest growing cities in North America alongside a marine ecosystem that is home to many charismatic species. These include endangered southern resident killer whales, whose population has dropped to just 75 individuals, and the Chinook salmon they depend on for survival.

“When you have a sense of place, when you know and care about it, you are more likely to feel connected to it and then take steps to help restore and protect it,” Naugle said.

Only 5 percent of Washington residents surveyed could name the Salish Sea when described to them geographically, and only 9 percent named the location when the region was circled on a map. The majority thought it was called Puget Sound, which is the body of water west of Seattle but not a term describing the whole sea.

Results were only slightly better in British Columbia. Fourteen percent of residents could name it based on a written description, and 15 percent could identify the Salish Sea on the map. British Columbia residents were more diverse in their answers, with most identifying it as the ocean or the Strait of Georgia — the name of the body of water adjacent to Vancouver.

Only 32 percent of Washington respondents had ever heard of the Salish Sea prior to the survey and only 48 percent in British Columbia were aware of the name.

Low familiarity with the name is likely a reflection of the relative newness of the term Salish Sea. The name was adopted in 2010 after two decades of leadership by Bert Webber, a natural scientist at Western Washington University. It pays respect to the Coast Salish, the indigenous people who lived in connection with the sea long before western settlers arrived.

It also formally acknowledges that these individually named bodies of water — from Puget Sound to the Haro Strait — are part of a single, integrated ecosystem that spans an international border.

The power of place

The study was administered by David Trimbach, a postdoctoral research associate with the Department of Fisheries and Wildlife at Oregon State University. He is currently housed at the Puget Sound Partnership, a Washington state agency.

“Geographic literacy and place names matter, particularly when it comes to mobilizing communities and decision-makers around complex place-dependent problems,” Trimbach said. “If communities are not sharing place names or understandings of place itself, such problems may be more difficult to collectively communicate and solve. By highlighting the power and potential influence of place, this project adds to regional efforts to improve the Salish Sea ecosystem.”