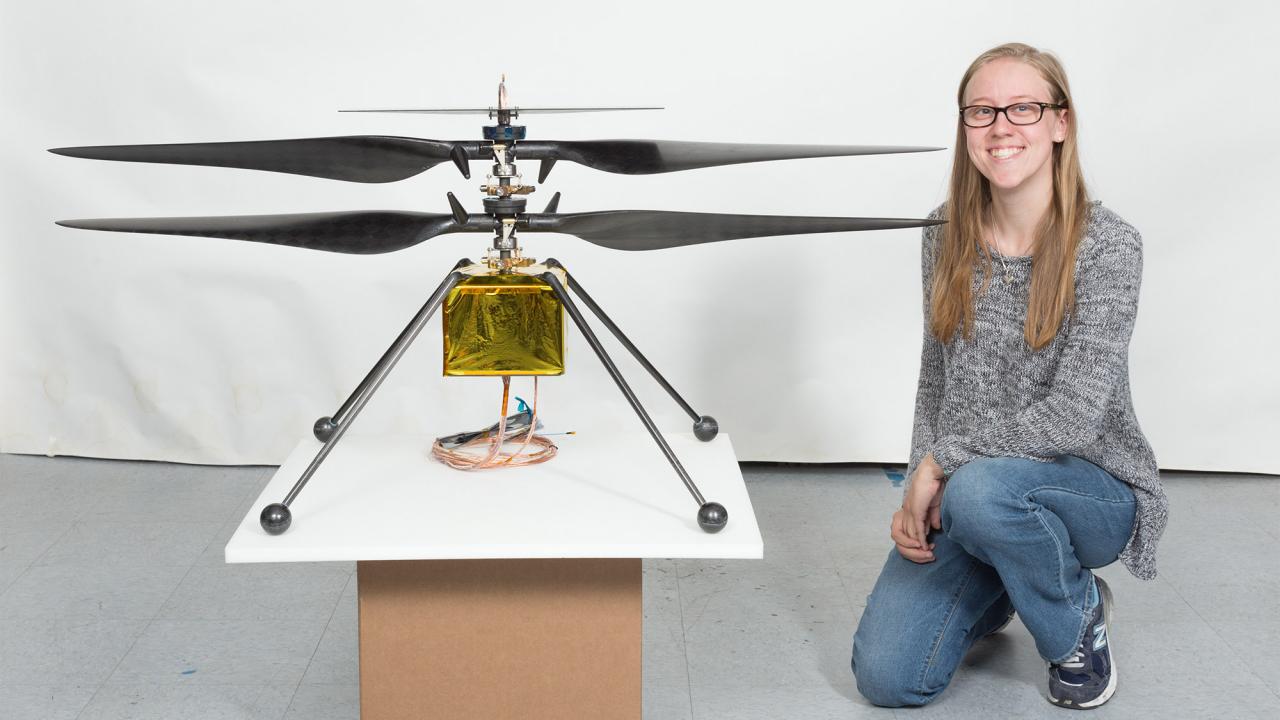 Updated 11 a.m. April 12: The first flight of the Ingenuity helicopter on Mars has been delayed until at least Wednesday, NASA said. “During a high-speed spin test of the rotors on Friday, the command sequence controlling the test ended early due to a ‘watchdog’ timer expiration,” NASA wrote. “This occurred as it was trying to transition the flight computer from ‘preflight’ to ‘flight’ mode. The helicopter is safe and healthy and communicated its full telemetry set to Earth.”

Sara Langberg ’16 used the curiosity and passion for learning things she developed at UC Davis to help NASA’s Ingenuity helicopter, part of the Perseverance mission, come to life.

Langberg is an aeromechanical engineer at AeroVironment, a global leader in unmanned aircraft systems with a long history of breakthrough innovation. Since joining the company in 2016, her team has been working with NASA’s Jet Propulsion Laboratory, or JPL, on the small robotic helicopter that will attempt the first powered flight on another planet.

“I’m honored and humbled to be a part of it,” said Langberg. “Hardware that I designed and built with my own hands is going to touch the surface of Mars and that’s just mind-boggling."

So far, Ingenuity has survived the harsh Martian night on its own and is going through its commissioning period. Once the JPL team confirms everything is working, they will perform the inaugural test flights on a flat part of the Jezero crater, potentially as early as Sunday (April 11). None of the flights will be longer than 90 seconds, but they will be enough to see if it works.

“That’s history-making,” she said. “We call it our Wright Brothers moment.”

Engineering for the unknown

Langberg’s focus was Ingenuity’s landing gear, working with the helicopter’s composite parts and working on kinematics loads models for its servos and swashplates, though she was able to work on nearly every part of the helicopter.

“Because I’m in a unique role, I get to do a little bit of everything,” she said. “I do lot of design work, but I also get to do a lot of the build work for those initial prototypes. It’s fun.”

A lot of her work was rapid R&D prototyping of different parts, which she says means, “build it, test it, see what works; learn fast, fail fast, make it better and try again.” This is largely because of how much prototyping and testing was required — every single part needed to be optimized specifically for this project.

“Every part is hyper-optimized to be as light or as strong as possible, so we had to get creative and do everything from scratch,” she said.

Ingenuity is the rotorcraft counterpart to Sojourner, NASA’s first Mars rover that was a proof-of-concept of the technology. If successful, it opens the door for future helicopters that are larger, carry more complex equipment, travel further and operate over terrains rovers can’t reach, such as up cliffs or down canyons. Though in theory Ingenuity will work, no one has flown a helicopter on Mars before, so testing it is the only way to know for sure.

“There’s no textbook to tell you how to design a helicopter for Mars,” she said. “Our biggest challenge was the ‘unknown unknowns’ — things that we didn’t know that we would need to expect and design for.”

A story of learning

Ingenuity’s deployment is the latest step in what Langberg calls her “story of learning” that began at UC Davis. She says it starts with her experiences in the Engineering Student Design Center, or ESDC, as a student assistant. Not only did she love working with the shop staff and her coworkers, but the ESDC was also her first experience with the type of hands-on building and prototyping that she now does every day at AeroVironment.

“I loved every minute of it,” she said. “Working with the shop staff was a lot of fun and it really taught me how to look at things from a manufacturing standpoint and learn different ways of building things. That hands-on building experience in the ESDC was priceless and what really enabled me to excel.”

Her experience in the ESDC nurtured her curiosity for mechanical systems, which led her to look for undergraduate research opportunities. She eventually joined the lab of professor and former astronaut Stephen Robinson, who inspired her with the world of possibilities in aerospace engineering.

“Professor Robinson is a huge mentor for me,” she said. “He really made me passionate about learning things, asking questions and thinking critically. I’d always been interested in aerospace, but he really got me excited about what’s possible.”

This curiosity, passion for aerospace and love of hands-on projects continue to compel her at AeroVironment and as she continues to tell her story and learn more new things every day. Though Ingenuity is on Mars and out of her hands, she’s excited to see what she’ll help build next.

“I still feel very much like I’m in that learning environment at UC Davis,” she said. “I’m still building things, I’m constantly asking questions about the systems I’m working on and I’m learning new skills every day. Having that curiosity and passion for trying things feeds well into a program like Ingenuity.”

Noah Pflueger-Peters is a content specialist in the College of Engineering, and can be reached by email or phone, 530-400-4012.