What is COVID-19 Doing To Company Balance Sheets?

The COVID-19 pandemic has forced finance executives to closely examine the potential for impairment of assets on the balance sheet. Impairment is an accounting exercise to assess the value of certain assets and write down the assets immediately if there has been a significant decline in long-term value. Impairment not only reduces the value of assets on the balance sheet, it also lowers earnings in the income statement.

According to yearly impairment studies conducted by Duff & Phelps, during the Great Recession in 2018, there were 502 goodwill impairment events recorded by public companies, resulting in $188 billion in lowered earnings. 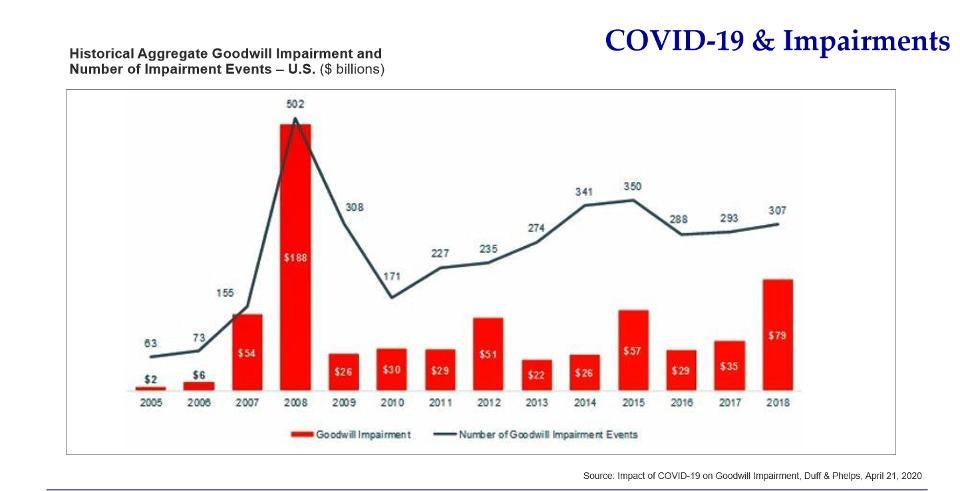 Impairments spiked to $188 billion during the recession of 2008.

The impact of COVID-19 is expected to be more severe than 2008. The International Monetary Fund projected global economic activity to fall 3% this year. For comparison, the 2008 crisis resulted in only a 0.1% drop in global GDP. As a result, there is a potential for even greater impairments this year versus in 2008.

The financials related to public companies in the first quarter of calendar 2020 already included some significant impairments.  The U.S. officially entered a national state of emergency on March 13, 2020, so some companies reported impairments when they released first quarter financials. First wave of impairments in first quarter of 2020

Most companies perform regular impairment tests for certain assets annually as part of their annual audit. However, if there is a triggering event, impairment testing will need to occur sooner. Triggering events occur when circumstances suggest that the carrying amount of an asset may not be recoverable and there may be impairment. Triggering events include economic, market, industry, and company-specific factors – with many of the COVID-19 impacts qualifying as triggering events. According to Josette Ferrer, Managing Director of Clairent Advisors, “given the depth of market and economic declines, if they have not yet done so, we expect most CFOs will conduct impairment tests in Q2 2020.”

Even companies that recognized some impairment for first quarter, could see further erosion in valuations by the end of June. Sas Mukherjee, President of San Francisco Chapter of Finance Executive International (FEI), indicated “Our member CFOs are watching this topic closely. We are guiding them on scenario planning for a potential second wave of Covid-19 or a slower-than-expected economic recovery and proven best practices for proactive transformative actions to not only avoid additional impairments but emerge from the crisis structurally stronger.”