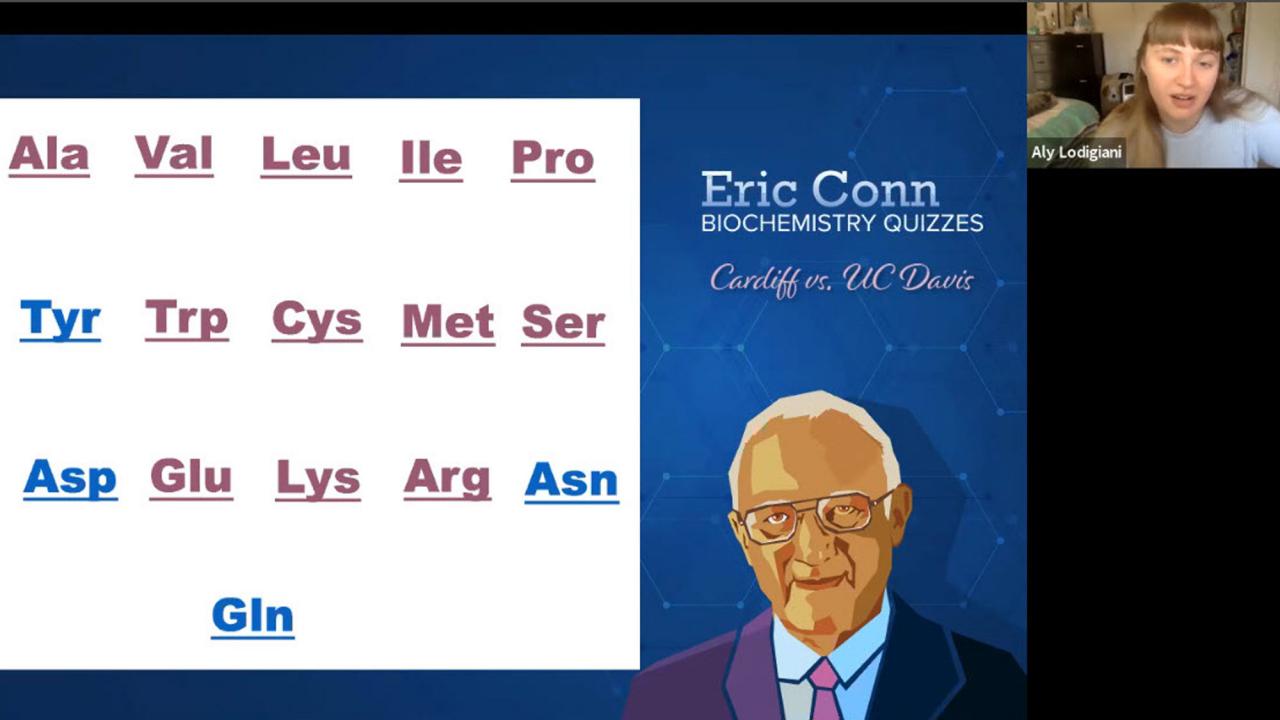 Challenge and Conviviality Across the Pond

They reached across the ocean, 5,000 miles away, and delighted in the challenge, the congeniality and the conviviality of the final event in the Eric Conn Memorial Biochemistry Quizzes.

Professor Conn (1923-2017), a UC Davis faculty member for 43 years, was the third recipient of the UC Davis Prize for Undergraduate Teaching and Scholarly Achievement. He received the Academic Senate’s Distinguished Teaching Award in 1974 and the senate’s highest honor, the Faculty Research Lecturer Award (now called the Faculty Distinguished Research Award), in 1977. He was a member of the National Academy of Sciences.Read more about Conn here, and hear from him in this video.

“They had so much fun,” he said. “Ten years from now, most of these students will be in another field and professions unrelated to biochemistry. Those not remaining in biochemistry will probably forget everything they learned this quarter. However, all students who participated will never forget this experience. In the middle of a pandemic and suffering from Zoom fatigue, they made new friends across the pond. Eric Conn would be happy to see undergraduate students having this experience.”

UC Davis won the event, but “UC Davis had a competitive advantage because this was their second game,” Leal noted. “Everything was new for Cardiff. Additionally, the contents of our syllabi differ.”

‘The world we live in’

“The Cardiff team did a marvelous job,” Leal said. “It was a pleasure seeing Jessica and her team more than 5,000 miles away playing on the screen. That’s the world we live in: global learning.”

The event also created friendships. “A student from UC Davis reached out to become an electronic pen pal with Cardiff students,” Leal said, adding that “both Cardiff and UC Davis parents wrote direct emails indicating how pleased they were with the event.”

The deans will exchange hoodies and all participants will receive certificates and gift cards.

Nearly 300 people logged in for the day’s program, which started with two UC Davis semifinals — Ironic Bonds vs. Gibbs, and Alpha Helices vs. Beta Strands, the teams that advanced from campus preliminaries in February. The Ironic Bonds team, victorious in its semifinal against Gibbs, would be joined by one member of the Alpha Helices in the final vs. Cardiff.

Although the two universities are an ocean away, several faculty share close ties. One of the Cardiff judges, Professor John Harwood, did his first postdoctoral studies at UC Davis with the late Professor Paul Stumpf, who, along with Conn, founded the Department of Biochemistry. Harwood knew both Conn and Stumpf well, especially with their labs close to one another.

Other judges were Charles Gasser, UC Davis professor emeritus; Clark Lagarias, UC Davis distinguished research professor and a member of the National Academy of Sciences; and D. Dafydd Jones of the Cardiff faculty.

Professor Conn also enjoyed close ties with Professor Gasser. “It was Eric who persuaded Charles, then in the private sector, to apply for a position at UC Davis,” Leal said. “Then when Charles joined UC Davis faculty, Eric gave him his lab, which he used until his retirement.”

Two Cardiff faculty members with links to UC Davis assisted with organizing the event and reading the questions:

Here are some of the questions from Wednesday’s program (click each question to see the answer):

Kathy Keatley Garvey is a communications specialist with the Department of Entomology and Nematology. This article originally appeared in her Bug Squad blog. Email: kegarvey@ucdavis.edu.