Crashes and Traffic Are Down by Half, Saving State $40 Million Per Day During Shelter-In-Place

Traffic accidents and crash-related injuries and deaths were reduced by half during the first three weeks of California’s shelter-in-place order, which began March 20. The reductions save the state an estimated $40 million per day — about $1 billion over the time period — according to an updated special report released this week from the Road Ecology Center at the University of California, Davis.

The report, “Impact of COVID-19 on California Traffic Crashes,” is published on the center’s website. Its maps, charts and findings compare hot spots for injuries and fatal crashes on state highways and major roads patrolled by the California Highway Patrol between Feb. 27 and April 11, 2020 — the days leading up to and following the order — and the same period in 2019.

“The reduction in traffic crashes, injuries and fatalities is a bit of a silver lining for people who are staying at home and who are impacted by the pandemic,” said UC Davis Road Ecology Center director and project lead author Fraser Shilling.

The downward trend in collisions was disrupted in early April when record-breaking rains in Southern California brought a brief return to “normal” levels of crashes, the report noted.

Altogether, the reduction amounts to about 15,000 fewer collisions per month and 6,000 fewer injuries or fatal accidents per month that can be directly attributed to the shelter-in-place order.

“The reduction in traffic accidents is unparalleled,” the report states. “There is no equivalent in our recent transportation history to such large changes in vehicle movement on our state and local roads.”

But it notes that there is a key outstanding question: “Why are so many people still driving on what may be non-essential trips?” 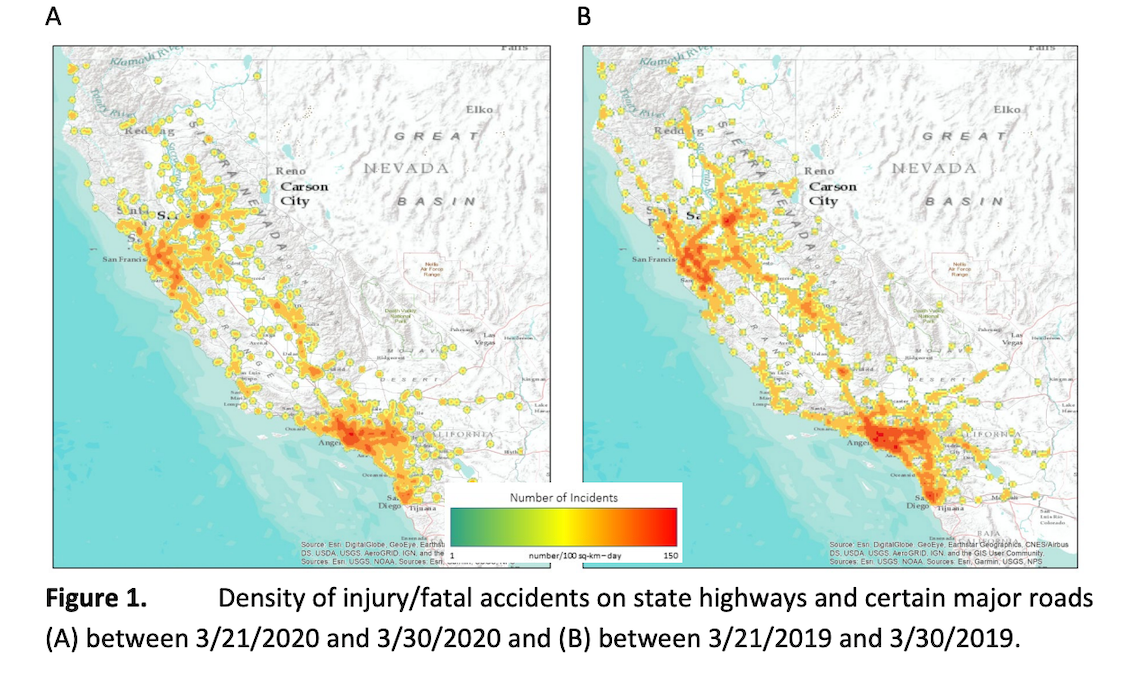 “We are so used to driving, I think it is difficult for people to stop, even with state and local orders compelling them to do so,” Shilling said.

To create the report, the authors used observations and reported traffic incidents from CHP in the real-time “California Highway Incident Processing System,”  or CHIPS. The Road Ecology Center often uses state transportation data to track collisions between wildlife and vehicles, which it reports annually. The shelter-in-place order offered a new opportunity to explore unintended impacts of the order on state highway traffic conditions.

The report was co-authored by David Waetjen in the UC Davis Department of Environmental Science and Policy.