Australia is Failing on Electric Vehicles. California Shows It's Possible to Pick Up the Pace

Among the many similarities between California and Australia, both are impacted by bushfires and climate change, and both are home to larger cars and trucks than is the norm in developed countries. They are dissimilar, though, when it comes to electric vehicles and vehicle regulations. While California has been pursuing low-carbon and electric vehicles for decades, Australia has trailed most developed nations.

Australia, a country with no vehicle fuel economy or CO₂ emissions regulations, is debating how to move forward. The local auto industry suggests Australia needs a slow transition to electric vehicles and should lag the United States, Europe, China and neighbouring New Zealand. Compared to proposed European vehicle emission standards of 43 grams of carbon dioxide per kilometre in 2030, the local industry proposes 98-143g CO₂/km (for light cars and SUVs).

The proposed Australian target would result in a slow transition, which new research suggests will have little or no effect on the transport sector’s CO₂ emissions.

The rationale for a slow transition is the same as was heard for decades in California: electric vehicle prices are too high, there isn’t enough infrastructure to support these vehicles, their driving ranges are too short, and certain models aren’t available (electric utes, for example).

These concerns have some validity, but are largely out of date. Australia in 2022 faces a very different situation from California when it started down the electric vehicle path.

Let’s deal with why each of these four concerns might now be overstated.

Drivers in both Australia and California travel similar distances per year. In both regions, most trips are well within electric vehicle range.

Further, in both regions most households own two vehicles. This means buyers can, if needed, use another vehicle for longer trips. 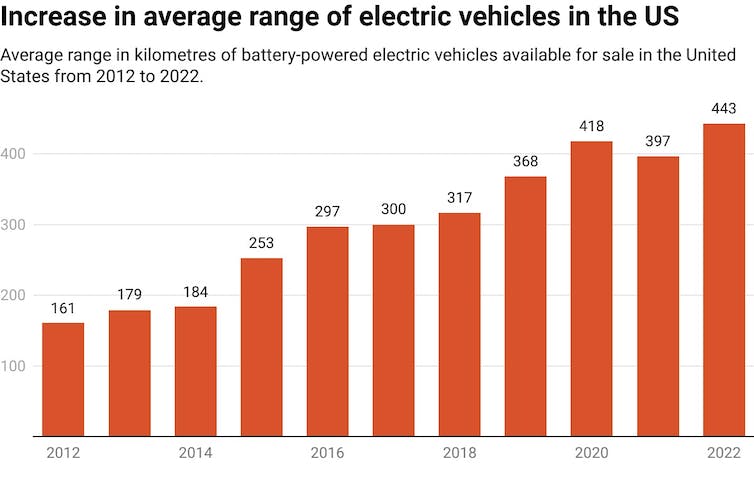 In California and other markets like Norway, most early electric vehicle buyers charge at home on their driveway or in a garage. In Australia even more people live in a detached house than in California. Drivers in these households could charge their vehicle at home, which reduces the need for public charging stations.

Public charging may be needed to support occasional charging, to enable longer journeys and to support the smaller proportion of households without home charging. But public infrastructure is not a prerequisite for early market growth.

Australia already has as many charging stations per person as California had in 2016. In fact, Australia might be only a few years behind.

Consumers have also been shown to be willing to pay more for an electric vehicle compared to a conventional vehicle. This might be partly due to the savings on fuel and maintenance costs.

In 2022, 316 electric and 162 plug-in hybrid models are on sale globally. These models include SUVs, utes and pick-up trucks.

Australia may be well positioned for a rapid transition to electric vehicles if it adopts more supportive policies. If Australia brings in policies such as ambitious fuel-economy standards or a zero-emission-vehicle sales mandate, the country could benefit in the same ways as California did.

Supportive policies like these help set the stage for the early electric vehicle market to grow. They do this by:

An electric vehicle mandate can also protect consumers from supply ebbs and flows that are common in import-only markets.

Other nations have been down this road

Australia is not the first nation to grapple with these challenges. South Korea, despite being a global producer of electric vehicles, was experiencing slow domestic market growth. Many Korean electric vehicles were exported to regions with policies more friendly to the technology.

The government responded with policies to support electric vehicles. Since then, domestic sales have tripled. South Korea is now the seventh-largest electric vehicle market in the world, up from 11th in 2019.

And as federal Energy Minister Chris Bowen noted at the EV Summit last month, with the right policy settings, Sweden increased its proportion of electric vehicle sales from 18% to 62% in just two years.

Similar approaches could yield similar results for Australia. While some nations may need a slower transition for a variety of reasons, Australia need not be one of them. Concerns about range, infrastructure and model availability can be readily overcome.

All that may be needed is for the federal government to adopt policies that support electric vehicles. Based on the remarkable improvements in the technology and what has been learned in California and elsewhere, Australia is well placed for rapid market growth.

This article is republished from The Conversation under a Creative Commons license. Read the original article.