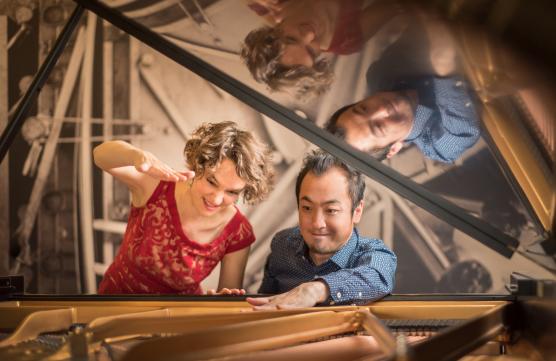 Since joining forces to form professional duo ZOFO in 2009, internationally acclaimed solo pianists EVA-MARIA ZIMMERMANN and KEISUKE NAKAGOSHI, have electrified audiences from Carnegie Hall to Tokyo, Japan, with their dazzling artistry and outside-the-box thematic programming for piano-four-hands.  One of only a handful of duos worldwide devoted exclusively to piano duets, ZOFO is blazing a bold new path for four-hands groups by focusing on 20th and 21st century repertoire and by commissioning new works from noted composers each year.

The duo's new groundbreaking multimedia commissioning project, the ZOFOMOMA Live Concert Experience, unfolds as an aurally and visually stunning walking tour through a virtual museum of modern art. For this cutting-edge project ZOFO solicited new works from top composers around the globe, and requested each to select a painting representative of his or her culture as a springboard to the creative process. The result is a rich tapestry of sights and sounds reflecting the cultural, musical and artistic diversity of our world community. Against an ever-changing backdrop of contemporary paintings, 15 new ZOFO-commissioned duet compositions are revealed throughout the performance, including one by UC Davis’s (and regular Capital Culture List co-host) Pablo Ortiz.

This week’s free Shinkoskey noon multimedia concert will feature selections from the full Live Concert Experience, including projections of the visual art that inspired the musical compositions.

Called “the Jascha Heifetz of recorder,” Judith Linsenberg is one of the leading exponents of the recorder in the U.S. and has been acclaimed for her dazzling, sparkling playing. In this program, Linsenberg joins Sacramento Baroque Soloists to perform works of Bach, Graun, Graupner, Telemann, and Schenck. Sacramento’s professional baroque music ensemble, the Sacramento Baroque Soloists creates vibrant, engaging performances of music from the 17th to 19th Centuries. The group has a local reputation for quality and compelling programming. Repertoire includes Sonatas to concertos and sinfonias, from Uccellini and Gabrielli to Lully, from Vivaldi to Biber and Bach.

The original Chordettes hit it big in the 1950s with songs including “Mr. Sandman” and “Lollipop.” Now, this new incarnation is bringing back the harmonies and songs with beautiful costumes, choreography, some slick and sassy comedy and audience participation.  A trip down nostalgia lane! 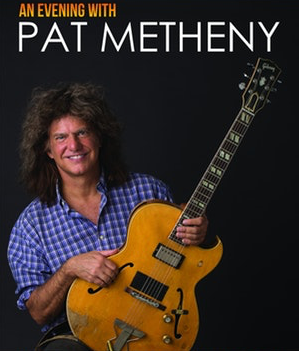 Grammy-winning jazz guitarist and composer Pat Metheny makes a stop in Sacramento as a part of his world 2018 tour. One of the living legends of modern jazz, Metheny has three gold albums and 20 Grammy Awards in ten different categories, including Best Rock Instrumental and Best Contemporary Jazz Recording. Incorporating elements of progressive and contemporary jazz, Latin jazz and jazz fusion, he’s performed with artists as diverse as Steve Reich, Ornette Coleman, Herbie Hancock, Brazilian singer Milton Nascimento and David Bowie.  Metheny continues to be one of the brightest stars of the jazz community, dedicating time to both his own projects and those of emerging artists and established veterans alike, helping them to reach their audience as well as realizing their own artistic visions.

The U.S. Army Concert Band and Soldiers' Chorus are considered "The Musical Ambassadors of the Army."  They tour around the county about 100 days of the year, bringing what they call “the Army story to the grassroots of America.”  The concert band’s 60 members and the 29 member chorus are known for their military marches and patriotic songs, but they also perform orchestral masterworks, operatic arias, jazz classics and Broadway musical numbers. They regularly share the stage with the likes of the Boston Pops and the National Symphony Orchestra.

This concert is free, but tickets are required. And if you can’t make it to the Harris Center Wednesday night, the concert will be live streamed on YouTube.

Opera season continues with The Metropolitan Opera’s “Samson et Dalilah.”  This vivid new production stars tenor Roberto Alagna and mezzo-soprano Elīna Garanča in the title roles. After electrifying audiences in the Met’s production of “Carmen” in 2009, the duo has reunited for another sensual French opera, Saint-Saëns’ take on the Biblical tale.

Darko Tresnjak, who won a Tony Award for Best Direction of a Musical in 2014 for “A Gentleman’s Guide to Love & Murder,” makes his Met debut directing a vivid, seductive staging, featuring a monumental setting for the last-act Temple of Dagon, where the hero crushes his Philistine enemies. Sir Mark Elder conducts the first new Met production of the work in 20 years.

“The Met: Live in HD” series transmits live opera performances in high-definition video via satellite from the Metropolitan Opera in New York City to cinemas around the world.  With behind-the-scene peeks and interviews during intermissions, this is a wonderful way to experience live, world-class opera close to home. 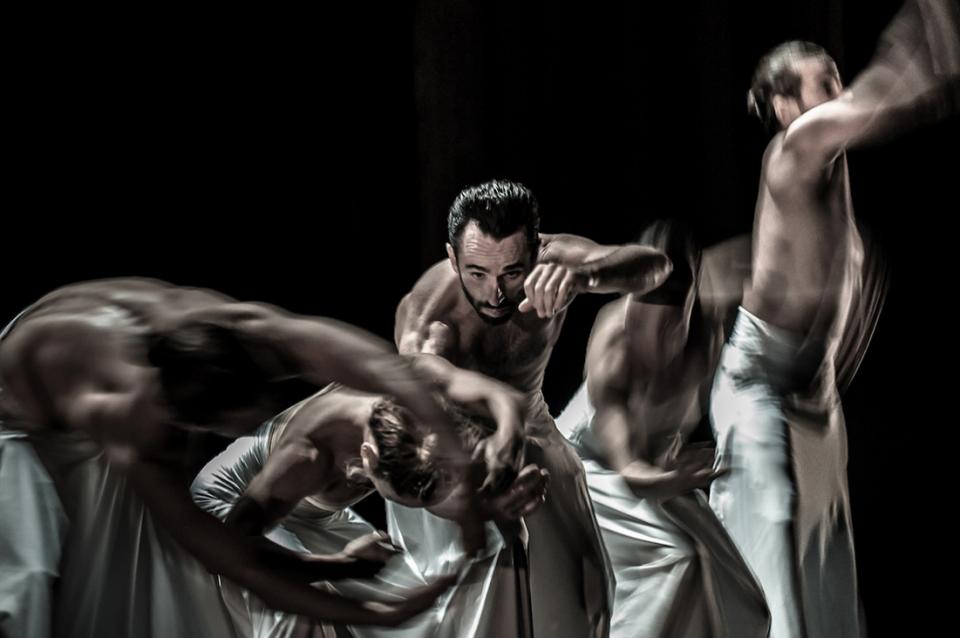 Sébastien Ramirez and Honji Wang create dance-theater works that are deeply rooted in hip hop and street culture, but also thrive on blending different artistic traditions to enlightening artistic effect. “Borderline” is a series of stunning and intimate vignettes about human relationships, love and hate, joy and sorrow, and how the dialogue between technique and creativity takes flight. Their dance is set to an atmospheric original soundtrack that incorporates electronica, spoken word and trance guitar. 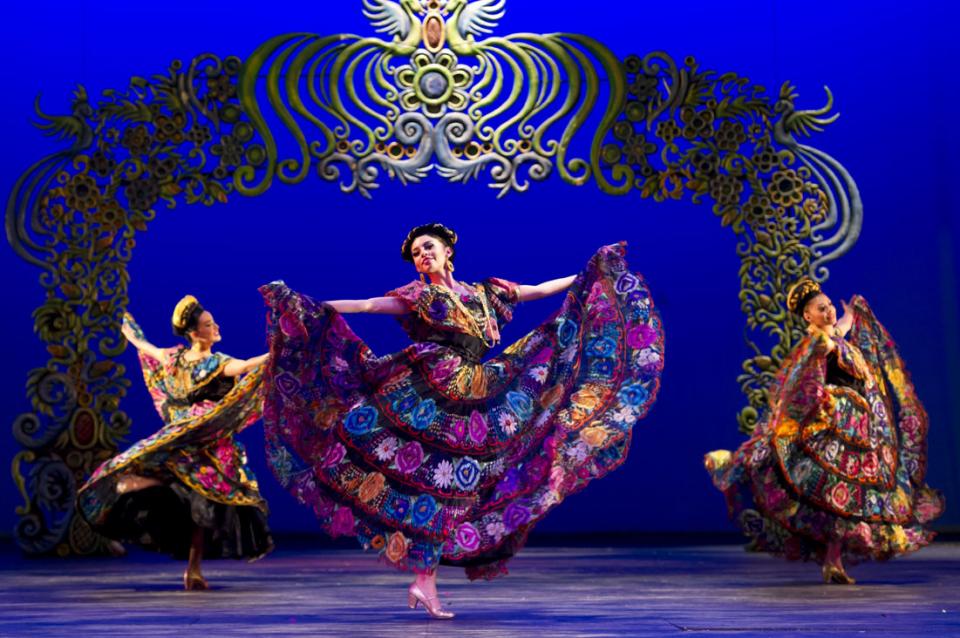 Pursuing the mission set out by company founder Amalia Hernández in 1952, Ballet Folklórico continues to rescue and present dances in costumes that reflect the traditional culture and historic dance traditions of Mexico. From the pre-Columbian era to the Hispanic viceroy period and the revolutionary years, her ballets transport audiences on a journey from the present through the past—the lords of heaven and earth come back to life, as well as the jaguars and the gods born of human flesh—disseminating rich Mexican tradition and folklore throughout the world. 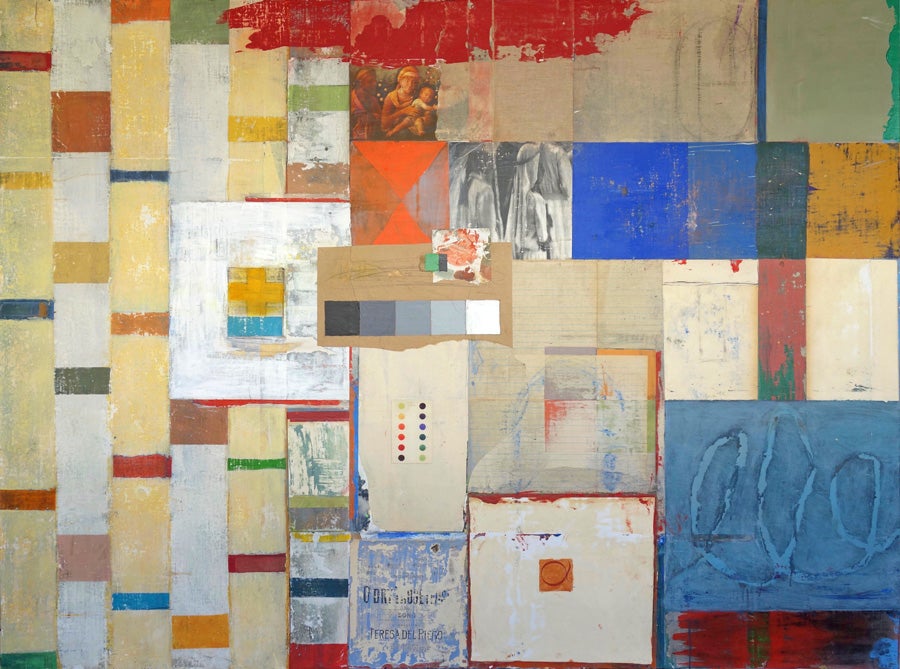 Mark Eanes is a painter, printmaker, photographer, curator and educator who lives and works in Benicia, California. His current mixed-media paintings take his own photographic studies of urban spaces as their starting point. Eanes works with traces of history — such as buildings and architectural fragments photographed in Sicily — that he further obscures with ephemera and debris from his students at California College of the Arts. Eanes has shown his paintings throughout California, as well as nationally and internationally. 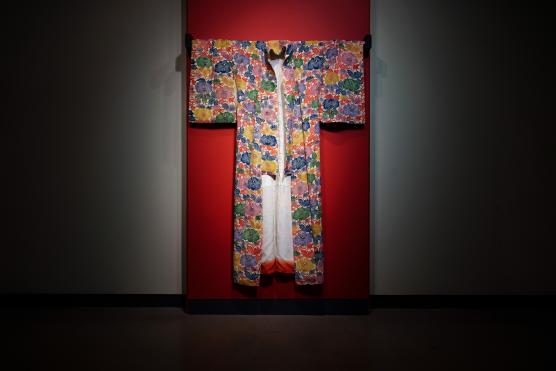 “Tekunikku: The Art of Japanese Textile Making” is an exploration of Japan’s iconic textile design methods, featuring fabrics and garments from the extensive collection of UC Davis alumna Catherine Cerny. A highlight of the exhibition is its actual installation which evokes the aesthetic of a traditional Japanese market where many of the objects were purchased.

This family-friendly show is filled with all of the wonderful ingredients we have come to expect from The Panto Company USA —  lots of laughter, stunning costumes, music and plenty of magic. Join Pinocchio on an adventure full of wonder as he sings and dances his way to becoming a real boy. He’ll experience Stromboli’s traveling show, Pleasure Island, the inside of a whale’s mouth and more with the Blue Fairy and Jiminy Cricket.