Kirk Colvin spent a year as U.S. Coast Guard attaché to the American Embassy during the final months of the brutal Jean-Claude “Baby Doc” Duvalier regime in the 1980s. His time there informed his novel Bloodless Coup, the 2022 winner of UC Davis’ Maurice Prize for Fiction, given annually to an alumnus. Bestselling author John Lescroart established the $10,000 prize 17 years ago in honor of his father. Learn more about the award and past winners. 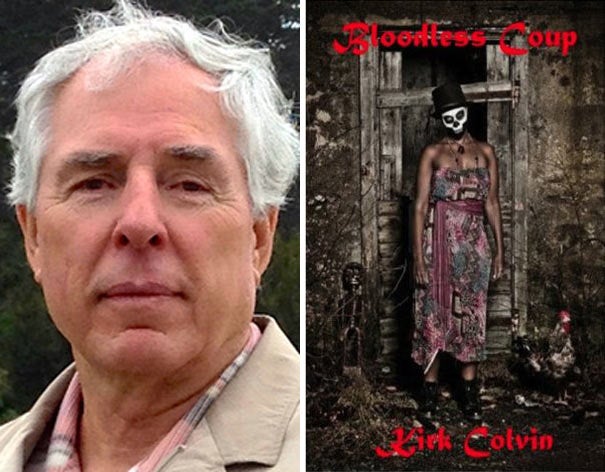 “I really feel quite honored,” said Colvin, who earned a master’s degree in creative writing from the UC Davis Department of English in 1998.

Like Colvin once was, the narrator of Bloodless Coup is the Coast Guard attaché in Haiti. He becomes an unwitting catalyst in a dangerous plot to depose Baby Doc that involves a powerful voodoo priest and takes a turn into the supernatural.

Growing up in the 1950s and '60s in what’ is now Silicon Valley, Colvin was captivated by the giants of science fiction writing and tried emulating them in his school notebooks. After earning a degree in biology, he became a Coast Guard officer and pilot, a career that sent him around the nation and, for a time, to Haiti. Shortly before retiring, he took a creative writing class at the University of Alaska; a story he wrote for the class won first place in a Pacific Northwest Writers Conference contest.

“That bit of success was enough to get me thinking about doing something with my writing,” said Colvin, who lives in El Dorado Hills. “After retirement, I joined the El Dorado Writers Guild — that was in 1994 and I’m still attending meetings.”

A few years later, he enrolled at UC Davis.

“I was considerably older than my classmates, but they didn’t hold that against me,” he recalled. “It was fun, challenging and rewarding. I had great instructors … and wonderful classmates whose encouragement and friendship made those two years a joy. I’d go back tomorrow and do it again if UC Davis would let me.”

Jeffrey Day is a content strategist in marketing and communications, College of Letters and Science.