Andrés Reséndez ‘Conquers the Pacific’ and Scales the Smithsonian

New Book Comes Out as Last One Inspires a Symposium 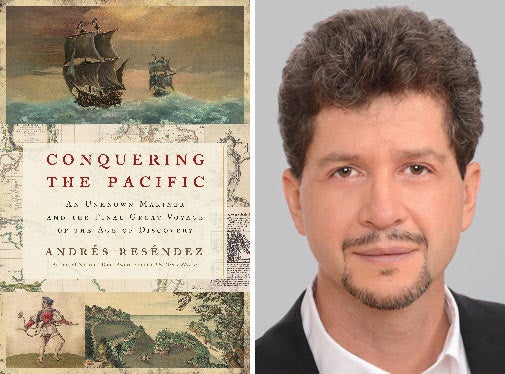 At once learned and lively, “Conquering the Pacific” is a remarkable journey of discovery. “Conquering the Pacific” has it all: a covert mission, mutiny and swordplay on the high seas, and a dynamic lead role in Lope Martín, the courageous and heroic Afro-Portuguese navigator. The crisp narrative whirls like a gyre, transporting readers to previously unknown seas and shores. A vital, captivating read.” — Buddy Levy, author of “Labyrinth of Ice”

September is proving to be a historic month for Andrés Reséndez.

The history professor’s last book, the award-winning The Other Slavery: The Uncovered Story of Indian Enslavement in America, has inspired a symposium at the Smithsonian Institution, Sept. 23-27 (see below), and his new book — described by various media as a story “as colorful and momentous as any on record for the Age of Discovery” and “a rip-roaring maritime adventure” — hit the shelves last week.

In Conquering the Pacific, according to Publishers Weekly, Reséndez “delivers a riveting account of the 1564-65 Spanish expedition that was the first to cross the Pacific Ocean from the Americas to Asia and return, launching an era of global trade with the Far East.”

Four ships set sail from Navidad, Mexico, “each one carrying a dream team of navigators,” according to the publisher, including Lope Martín, a mulatto who had risen through the ranks to become one of the most qualified pilots of the era, and the famed explorer Andrés de Urdaneta, an Augustine friar, piloting two of the four vessels.

“Once underway, the expedition’s lookout ship, piloted by Martín, became separated from the others during a storm,” according to Publishers Weekly. “Reséndez evocatively traces Urdaneta and Martín’s subsequent adventures, including encounters with Pacific Islanders, a mutiny and a near shipwreck” — enlivening the story even more with “lucid explanations of navigational techniques, larger-than-life characters and colorful anecdotes from the age of exploration.”

Martín completed the never-before-accomplished return, or “vuelta,” followed by Urdaneta, who would bask in the glory, while Martín’s stunning accomplishment was lost to history.

Mexico investigated Martín and his captain for leaving the fleet behind — and Martín was sentenced to be hanged for treason.

‘THE OTHER SLAVERY’ SYMPOSIUM 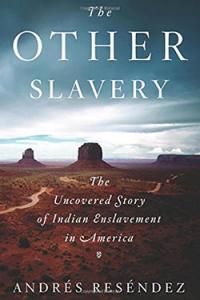 Reséndez Will Give Opening Talk in Smithsonian’s Virtual Program

The Smithsonian Institution will center a virtual symposium this month around groundbreaking research by UC Davis history professor Andrés Reséndez on the enslavement of Native Americans.

The symposium, “The Other Slavery: Histories of Indian Bondage from New Spain to the Southwestern United States,” features a talk and an eight-page background paper by Reséndez, author of the award-winning history The Other Slavery: The Uncovered Story of Indian Enslavement in America, published in 2016.

Reséndez will be one of four scholars in the symposium’s opening session, “Global and National Contexts of Indian Bondage.”

The Other Slavery is the first comprehensive treatment of Native American enslavement from the time of Columbus to 1900. It was a finalist for It won a 2017 Bancroft Prize and California Book Award and .was a finalist for a 2016 National Book Award.

See the symposium program and more about the event here.

Reséndez estimates that 2.5 million to 5 million Native people were enslaved during the four centuries between the arrival of Columbus and the beginning of the 20th century.

The symposium brings together experts from a range of academic disciplines, including Indigenous studies, anthropology and history, to examine little-known stories of coerced labor and peonage and the long-term impact of Indian slavery. Panelists will discuss the legacies of Native American enslavement with Indigenous community leaders and cultural workers.

Kathleen Holder is a content strategist in the College of Letters and Science. Contact her by email or phone, 530-752-8585.