Unexpected Art: Words on the Sidewalks

Unexpected Art is one in a series of stories written about art in unexpected places. See the last such piece in the Arts Blog here. The next piece will be on the unexpected art at the UC Davis library.

You don’t have to enter a museum, library or lecture hall to come across unexpected art on the UC Davis campus. You just have to walk around. If you’ve noticed words emblazoned in cement walkways on campus recently, you may know what I’m talking about.

The words originate with Stephen Kaltenbach, a renowned conceptual artist and UC Davis alumnus whose work is on exhibition now at the Jan Shrem and Maria Manetti Shrem Museum of Art. He was inspired by the municipal signage he encountered when he lived in New York, and in 1968 created a series of eight Sidewalk Plaques intended to be installed in public places.

“The lack of information could make them invisible to you,” Kaltenbach said during the Jan. 26 exhibition opening at the museum. “You could actually be a guy delivering a pizza or something and not be interested in art and you could walk by a plaque in the sidewalk that said FIRE and it could be urban nature.”

The idea is that they are not on display, in the traditional sense that public art is, such as a sculpture on a plateau, or a mural on a wall. The casual observer just happens upon them.

“I decided to do a series of plaques that anyone would recognize as a natural, so I did a series of BLOOD, SKIN and BONE. Even though you can see all that stuff on the streets of New York, more than you want in some cases, it would be something that would not fit into your idea of what would be natural.” — Kaltenbach

Now, five of these bronze plaques are embedded on various sidewalks around campus. There are no explanatory labels. There is no map or guide. You just have to find them.

Here are some hints.

One of these plaques, entitled ART WORKS, is installed near the Manetti Shrem Museum. The other plaques displayed on sidewalks throughout campus are labeled EARTH, WATER, FIRE and AIR.

Members of the community have started to find these unexpected pieces of art. Can you find them?

The entire Sidewalk Plaques series, including four additional Kaltenbach plaques, are easy to find in the museum’s galleries during the exhibition, which runs through May 10.

“I decided to do a series of plaques that anyone would recognize as a natural, so I did a series of BLOOD, SKIN and BONE,” Kaltenbach explained. “Even though you can see all that stuff on the streets of New York, more than you want in some cases, it would be something that would not fit into your idea of what would be natural.”

The plaques have been showing up on social media in fun ways. Below is one example. 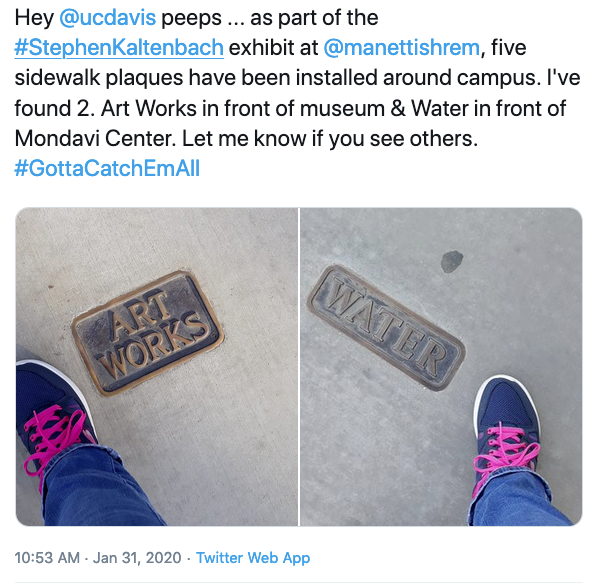 The Manetti Shrem Museum launched “Stephen Kaltenbach: The Beginning and The End” on Jan. 26.

Laura Compton, communications specialist at the Manetti Shrem Museum, contributed to this piece.

Unexpected Art: At the Library, Look up Wherever You Are

Click Your Heels Together, Come in Costume to See ‘The Wizard of Oz’