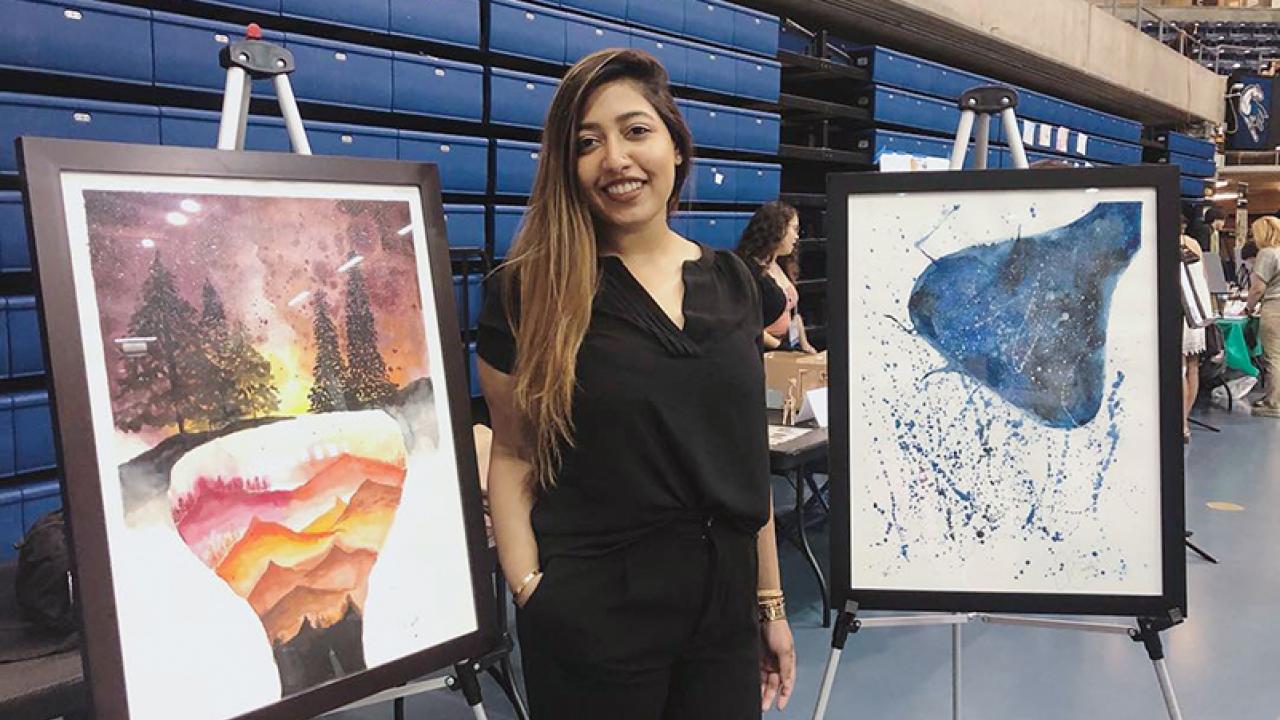 News and Media Relations Intern Leigh Houck contributed to this blog. The original story was written by Greg Watry in The College of Biological Sciences.

Sid Ganesh is a UC Davis senior who is double majoring in neurobiology, physiology and behavior and psychology, and she is also co-director of the Joan Viteri Memorial Clinic in the Oak Park neighborhood of Sacramento. It is a student-run clinic that offers healthcare to uninsured populations in an underserved area of the city.

She is also a watercolorist.

Her research and academic pursuits, and her experiences with her own health, all come together to inform her painting.

Since 14, Ganesh has struggled with chronic pain. The difficulties doctors faced diagnosing the root of her chronic pain inspired Ganesh’s interest in the science of pain.

“It was probably the most devastating thing that’s ever happened to me, to be in pain for that long,” she said. “The reason I manage it is connection, family and privilege.”

But others, she realized, did not have the resources to deal with a medical issue, hence her eventual leadership in a clinic for vulnerable populations.

Ganesh’s pain also inspired her to pursue art. She started drawing as a way to maintain motor function and finger dexterity.

So through her pain came art, more art, and more research too. Last spring, she displayed three of her works at ARC Pavilion on the UC Davis campus in the 30th Undergraduate Research, Scholarship and Creative Activities Conference. Her watercolor series there was called “The Art of Harm Reduction.”

The three-part series attempted to “embody the lived experiences of persons who use drugs.” It served as an homage to the vulnerable populations Ganesh regularly works with at the clinic, she said.

Each painting depicts a neuron rendered in a various state. In the first, the neuron, formed from flowers, tilts upwards, colorful spatters exploding from it in a blossom of ecstasy. In the second, the neuron is level. Within it, sunset-colored mountains sparsely dotted with trees (representative of dendritic spines) climb higher and higher to a star-filled expanse. In the final painting, the neuron looks like a wilted flower with blue and black dripping from it. The series is a pictorial progression of elation, dependence and addiction.

“I wanted it to feel overwhelming, like your entire cosmos depends on this substance,” she said of the last painting.

“The current rhetoric portrays substance use disorders as a moral failing and it is critical that we move away from that damaging narrative,” said Ganesh, who’s worked with the clinic for over three years.

“Instead of the distorted notion that people have somehow failed,” she continued, “we want it to be about hope beyond limits, radical love and unconditional positive regard.”