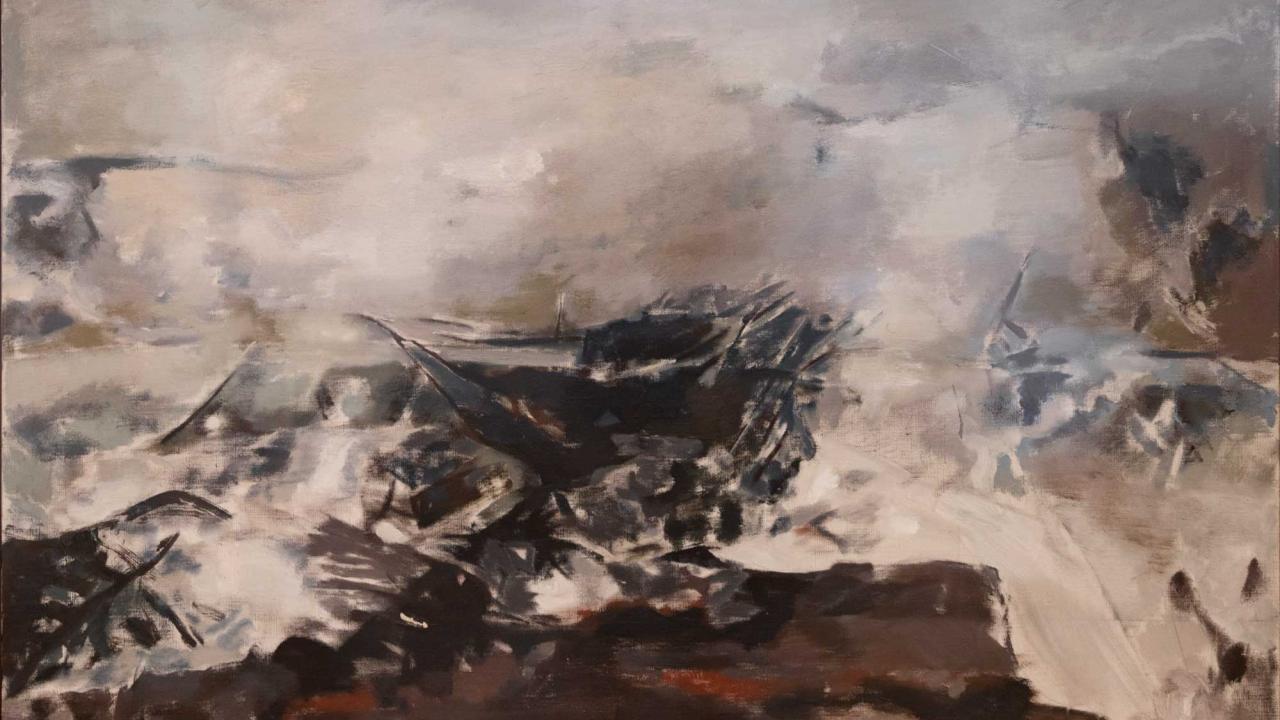 For many years, the large and inspiring piece of art, “Fog, Ocean and Wind,” greeted guests entering the Davis home of an early pioneer in oncology. Now, the painting, created in 1956 by renowned abstract artist Balcomb Greene, welcomes cancer patients coming for treatment at UC Davis Comprehensive Cancer Center.

“It is thrilling to see the painting he loved in a place he loved. My husband was an early advocate of the cancer center,” said Carla F. Andrews, wife of the late UC Davis oncologist Neil C. Andrews, who died just shy of the age of 100 in 2015. “It’s an amazing building and the ‘comprehensive’ status the cancer center has received from the National Cancer Institute is equally impressive,” she added.

The painting was to go to UC Davis upon Carla Andrews’ passing but, still healthy, she decided to make sure it was settled in its new home while she was here to see it.

Cancer center director Primo “Lucky” Lara Jr. expressed gratitude for the generous bequest, “The exquisite painting adds a great deal to our growing art collection at the cancer center, much of it donated by people such as the Andrews who wanted to share art that they knew would bring beauty to the cancer center while giving patients hope and strength to face their cancer.”

In 1966, Andrews was attending a global meeting of the American College of Chest Physicians when, his wife said, he spotted the painting during a visit to the U.S. Embassy in Copenhagen. She said he fell in love with the contemporary artwork.

At the time, the 40” x 50” painting of waves crashing on a rugged shoreline was on loan from the Saidenberg Gallery in New York City as part of a worldwide tour to exhibit the work of American artists.

“Mr. Greene set up a studio in a village at the east end of the Long Island peninsula near the 1796 Montauk Point Lighthouse. We think the strong Atlantic surf inspired this painting and many of his other works,” said Carla Andrews.

Andrews, who was practicing in Columbus, Ohio, at the time, tracked the painting to the New York City gallery in 1968 and quickly purchased it. Not long after, he brought the painting to California after he joined the faculty of the new UC Davis School of Medicine in 1970.