For Engineers: Do the Math for Better Writing 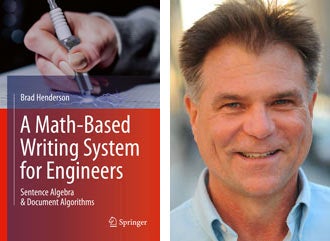 “Sort of like a mini-Strunk and White ‘The Elements of Style’ for engineers.” — Brad Henderson

In a new book to help engineering students and working professionals with their writing, Brad Henderson, a continuing lecturer in the University Writing Program (and who also has a degree in engineering), speaks to them in their own language: math.

“No matter where you are from around the globe, if you’re an engineer, it’s almost certain that you can read, write and speak about engineering content using numbers, symbols and equations,” Henderson writes in the introduction to A Math-Based Writing System for Engineers: Sentence Algebra & Document Algorithms.

Henderson then proceeds to use numbers, symbols and equations as a touchstone, or analog, in modular, self-contained lessons.

Says Henderson: “For readers interested in learning more about how little sentence machines work at a component level (aka, grammar), there are lessons in ‘sentence algebra.’ For readers who are interested in improving and refining document writing skills, there are lessons on how to prepare concise and effective emails, proposals and reports using annotated flow charts, or ‘document algorithms.’

Learn more about Henderson in “Drumming Engineer, A Writer at Heart,” from UC Davis Magazine.

“Sort of like a mini-Strunk and White The Elements of Style for engineers, the book’s ‘sentence optimization’ segment can be particularly useful for multilingual engineers who know sentence fundamentals but need further work on adding exactitude and smoothness (fluency) to text delivery.”

Henderson notes an economical twist: “Since the UC Davis Library subscribes to SpringerLink, students, staff and faculty have access to eBook copies of this and other Springer Nature titles for free. Although this progressive business model ensures that I’ll need to keep my day job at UC Davis (no problem for me), much more importantly, this publishing platform provides students with a huge variety of textbooks and references that are used in Aggie engineering and science classes.”

Henderson is a third-generation faculty member at UC Davis, following his father, Jerry, professor emeritus of mechanical engineering; and late grandfather, S. Milton Henderson, professor of biological and agricultural engineering. Brad Henderson has been with the University Writing Program for nearly 20 years, teaching science, technology, engineering and mathematics, or STEM, writing classes, and also has 10 years of experience as a design engineer and technical education specialist in the industrial sector.

He holds degrees from California Polytechnic State University, San Luis Obispo (Bachelor of Science in mechanical engineering with a minor in English), and the University of Southern California (Master of Arts in professional writing).