They hatched last month in a nest on the hospital roof. The still-unsteady babies — thought to be three males and one female — are doing well. The young birds have a downy soft coat that is long and fluffy. Their pin feathers are beginning to emerge at wing tips and tail.

Read more about the family of birds.

The livestream is available on the UC Davis Health website.

Writing lecturer and city of Davis poet laureate emeritus sees alumna Kim Conley’s tweet, in which the professional runner is going her own way, and responds with this Eartha Kitt quote: "The river is constantly turning and bending and you never know where it's going to go and where you'll wind up. Following the bend in the river and staying on your own path means that you are on the right track. Don't let anyone deter you from that." 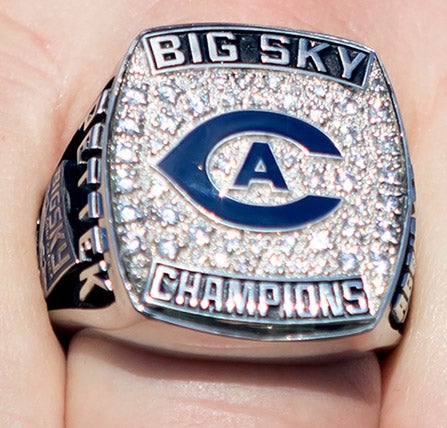 Head coach Dan Hawkins has been a part of numerous titles in his career, including four Western Athletic Conference crowns at Boise State, but presenting rings at his alma mater — particularly in the presence of numerous past Aggie coaches — proved a special highlight.

“This will go down in my career as one of the most blissful moments ever, and I mean that sincerely,” Hawkins said. The veteran mentor, now heading into his third season at the Aggie helm, invited former UC Davis coaches Bob Biggs, Bob Foster, Sam Young and Steve “Lou” Bronzan to the ceremony. According to Hawkins, the championships won in the 1970s through 1990s are connected to the 2018 title through such figures.

Replica versions of the ring are available to fans as a reward for purchasing 2019 season ticket packages.

How to meet faculty members

Faculty members have a message for students: You're the reason we're here, so don't be afraid to reach out. That's what a group of professors say in the above video, produced by Undergraduate Education, which includes an overview of what faculty members do and suggestions for ways students can communicate with them.