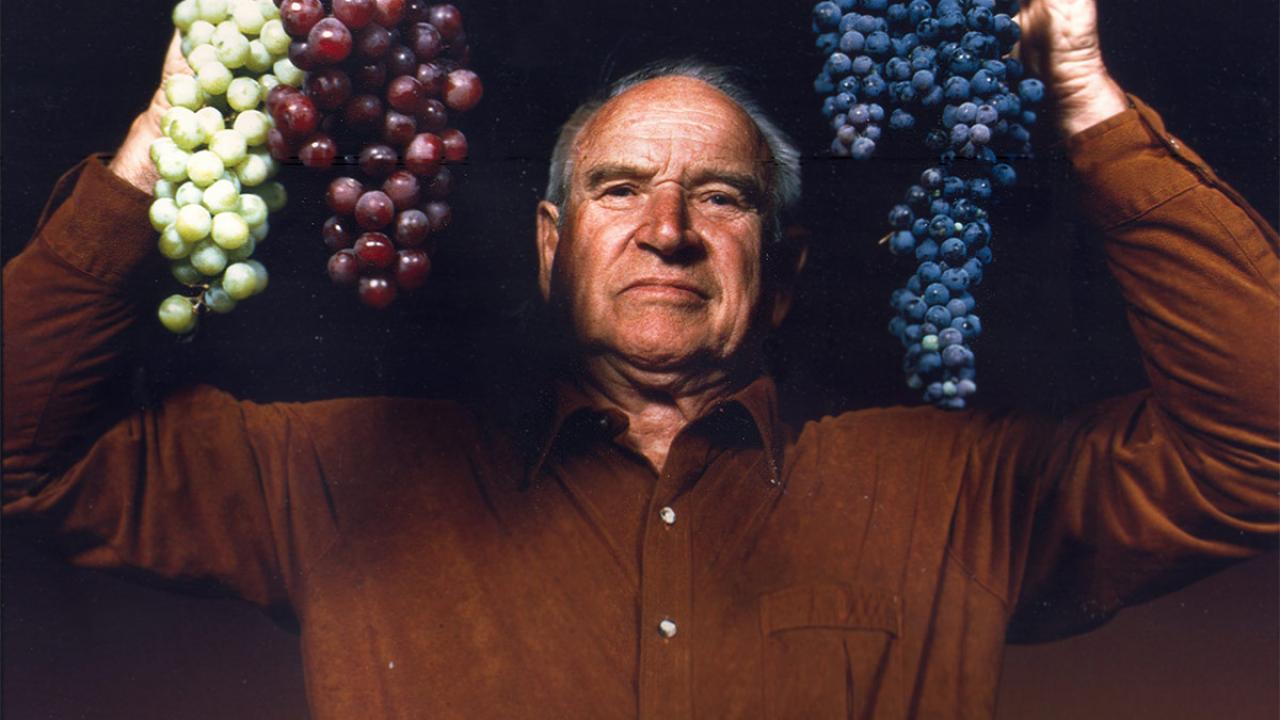 Today, UC Davis is a powerhouse with nearly $1 billion in research funding. Since our earliest days — we opened our doors in 1908 — UC Davis scientists, engineers and researchers have been making breakthroughs that impact our lives, from expanding agricultural capabilities to understanding DNA and mental disorders. Check out what we’ve done to help the world eat and drink better, survive serious illnesses and live in a healthier environment.

In the 1940s, UC Davis vegetable crops researcher Jack Hanna started breeding new tomato varieties that could withstand mechanical harvesting and be used for canning, tomato paste and pasta sauce. Engineers Coby Lorenzen and Steven Sluka joined Hanna to develop a mechanical tomato harvesting system, later commercially developed by the Blackwelder Manufacturing Co. The machine arguably saved California’s processed tomato industry during the 1960s, halving harvesting costs and leading to large increases in tomato acreage and tonnage within California and throughout the world. In 2005, the UC-Blackwelder tomato harvester was designated a historic landmark by the American Society of Agricultural and Biological Engineers.

Working in rice, Professor Pamela Ronald discovered the Xa21 gene that is key to disease resistance in plants. This plant gene was later found to be related to similar disease resistance genes, called “toll-like receptors,” in mammals and insects. Genetic discoveries like this are crucial for the development of hardier, more productive strains of rice, which is the staple food for more than half the world's population. The discovery of these genes in animals was awarded the Nobel Prize in physiology or medicine in 2011.

Honeybees are vital to much of agriculture, but bee breeding was largely a matter of chance until Professor Harry H. Laidlaw developed techniques to artificially inseminate queen bees. Laidlaw’s work made selective breeding of bees possible for the first time, and his methods are still used worldwide. In 2000, the UC Davis Bee Biology Laboratory was named the “Harry H. Laidlaw Honey Bee Research Facility” in his honor.

The Early Childhood Laboratory in the College of Agricultural and Environmental Sciences was the first infant-toddler program to pilot a technique for communicating with children too young to verbally express themselves through “Baby Signs” modified from American Sign Language. Research on the effectiveness of the gestures was pioneered in the 1990s by UC Davis psychology professor emerita Linda Acredolo and Susan Goodwyn, formerly of UC Davis and now a professor emerita at California State University, Stanislaus. Since then, the use of “Baby Signs” has become increasingly popular among parents and early childhood caregivers.

Kit Lam, professor and chair of the UC Davis Department of Biochemistry and Molecular Medicine, invented the “one-bead-one-compound” chemistry method that allows for rapid screening of millions of chemicals at a time to identify those that bind to diseased cells. The tool is advancing the early detection and precise delivery of treatments for cancers including brain, breast, prostate and pancreatic cancer and lymphoma. In addition, the method, part of a field called combinatorial chemistry, is helping the discovery of new agents for studying diseases to improve diagnosis and treatment. Combinatorial chemistry is now an indispensable tool in drug development and chemical research, and Lam’s research may contribute to solving many medical problems.

In a study published in the journal Neurology in 2001, a UC Davis MIND Institute team led by Randi Hagerman, Endowed Chair in Fragile X Research, described a new condition, fragile X-associated tremor/ataxia syndrome (FXTAS). This late-onset neurodegenerative disorder is associated with problems of movement, memory and the autonomic nervous system. Hagerman, a physician and MIND Institute medical director, had initially identified FXTAS two years earlier, after seeing patients in her clinical practice. At the same time, fragile X team member Flora Tassone, professor of biochemistry and molecular medicine, discovered that increased activity of the gene FMR1 gene dysregulation was the basis for the disorder. FXTAS is related to fragile X syndrome, the most common known cause of inherited intellectual disability and the leading single-gene cause of autism spectrum disorder. Prior to its discovery, FXTAS often was misdiagnosed as Alzheimer’s disease, Parkinson’s disease or other neurological disorders including neuropathy. Hagerman and Tassone’s current work is focused on finding treatments for FXTAS and facilitating a better understanding of all age-related neurodegenerative processes.

Stephen Kowalczykowski and the late Ron Baskin in the College of Biological Sciences pioneered a technique for watching a single enzyme unwinding a DNA molecule in real time. The work has led to new discoveries in the mechanics of how DNA is copied and repaired, processes that are vitally important to understanding the origins of cancer and birth defects. Kowalczykowski’s laboratory was also one of two at UC Davis, along with that of Wolf-Dietrich Heyer, to isolate the protein made by the breast cancer gene BRCA2.

Look in a high school biology textbook, and you’ll read that chloroplasts, the structures inside plant cells that carry out photosynthesis, contain their own genetic material separate from the cell’s nucleus. That discovery was made at UC Davis in 1959 by plant biologists Ralph Stocking and Ernest Gifford. Biologists think that chloroplasts were once independent organisms that in the ancient past formed a symbiosis with the ancestors of modern plants.

Widely known as the “father of the plug-in hybrid,” Professor Andrew Frank has championed this approach to fuel-efficient vehicles that combines gasoline engines with electric motors running on rechargeable batteries. Frank’s students built a number of prototype vehicles for the U.S. Department of Energy “FutureCar” and “FutureTruck” competitions, and this approach is now in use by major auto manufacturers.

Thomas Cahill and colleagues at the Crocker Nuclear Lab used the lab’s cyclotron to study air quality, among other things. In the 1970s, Cahill’s team provided evidence showing how lead pollution spread from freeways over neighborhoods, leading then-Gov. Jerry Brown to introduce the first controls on lead as a gasoline additive.

UC physicist John Le Conte took the first scientific measurements of Lake Tahoe’s clear blue waters in 1868. A century later, the Tahoe Research Group, founded by UC Davis Professor Charles Goldman, began regular monitoring of the lake. This work by the UC Davis Tahoe Environmental Research Center continues today. More than 40 years of data show the effects of human activity on the lake, and this information has been the basis for nearly all major environmental and planning decisions in the Lake Tahoe basin.

This story was produced by three writers in Strategic Communications and two from the UC Davis Health System Office of Public Affairs. Andy Fell is an associate director of News and Media Relations in Strategic Communications, and communicates news on engineering and science topics. Also in that office, Pat Bailey writes about veterinary medicine and agriculture, while Kat Kerlin covers the environment.  Phyllis Brown writes about health disparities, neurology and neuroscience, and obstetrics and gynecology for UC Davis Health, while Dorsey Griffith covers cancer, nuclear medicine and urology.​